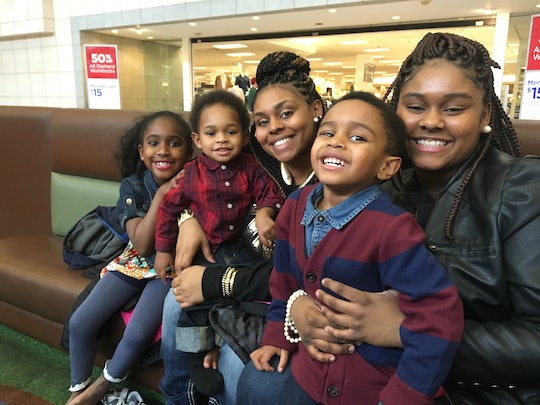 6 Women From Flint, Michigan Share How The Water Crisis Has Affected Their Lives

A few weeks ago, as I was checking out at the grocery store, my eyes flashed over to the issue of Time magazine on the shelf, with a beautiful baby on the cover and the headline screaming about the poisoning of an entire population in Flint, Michigan through the water crisis. My conscience prickled more than uncomfortably, because honestly, it seems surreal that something so horrific on such a large scale is happening literally right outside my door. My family lives very close to Flint — it's where we do our shopping, where we go to the mall, where we go for entertainment, or whenever my daughter just begs for those free chicken samples on a stick that she loves so much. The Flint River runs practically through my backyard, although, as "country folk," we have well water and have, fortunately, never had to worry about any issues with city water.

But still, it feels too close to comfort to know that babies and children and entire families are being poisoned 20 miles away from my own family's home. It feels like it should be one of those things that happen to other people, in other states, and other cities — places that aren't where I first got my ears pierced or played my first basketball game. It invokes feeling of helplessness and swirls of fear within me because, if something on that broad of a scale could go wrong, what else is out there that could be a danger to our families?

If I'm being honest with you, I've been avoiding reading anything about the Flint water crisis. It just feels too scary to me, and at this point I'm also ashamed of myself: If I've been moved by the plights of babies hurting across the world, it's time to action to help those families within my reach. So I started with simply talking to the mothers of Flint, to hear their stories, meet their babies, and to help put faces to an issue we all know about, but one that maybe we've been avoiding looking straight in the eye.

Here are their stories:

"I haven't drank the water in years, even before any of this came out. I have always said that something was wrong with the Flint water, since I was maybe in middle school. It tasted funny. I've always stayed away from it on my own, and cooked with my own bottled water. My mom had a filter for her water and my daughter has only ever had bottled water."

"I haven't been tested for it, but I was drinking and bathing in the water, you know, doing everything you need to do. I don't have a ride to pick up water so I buy it here [from Target]. They give us a 10-percent discount. I haven't been able to go to my doctor to get tested yet because I don't have a ride. I used to love my water, I would freeze it and just drink it. It's so scary. I do use it to cook with, though and enough to bathe in, you know. My son, he is grown, so that's good. If I had it any other way I would be out of Flint, but I can't afford it."

"I haven't noticed any effects, but I'm fortunate since I've always [had] bottled water. I've lived in Flint for 12 years. I've just always been one for bottled water; I still get really nervous even when we got the [lead] test done. I don't feel like it's safe for skin, [because] skin is porous. I only give the kids a bath every three or four days and it bothers me that we can't have a normal nighttime routine like other families, but I want to be safe. The kids all tested negative, but I worry about mine because I'm a coffee drinker, so I used to use the water for that. Now I only use bottled to cook. I was buying all the water, but now with the donation sites it saves a lot of money."

"My mom gets breakouts from the water and then people came in — we don't know where they were from, maybe the government — and they tested it. Her skin is really itchy and never used to be like that and her hair is falling out and mine has been too. We are moving to Linden now because of it; my mom is looking for places right now."

"Over the last few months my daughter had been losing hair. My friends thought I was crazy. Her hair used to be so thick, now I can fit it all in one hand in a ponytail. She was crying the other day because she was so upset that her hair is falling out. My youngest (who's 5), I['ve] noticed behavioral changes in. I know it's not necessarily because of the lead, but he is whinier. They are giving out free filters, but a lot of people can't afford the faucets that fit the filter. They don't tell you that, that you will need a new faucet. I have two filters, but no faucet to fit it, and I called the sheriff's office like they said to, they are supposed to call you back to make an appointment. They said between two and five days, and it's been a week.

"For a lot of mothers, that's been the main concern. We use a lot of bottled water, but [the kids] need something for showers — and you can't put hot water through the filters, which is another thing they don't tell you. And the filters don't fit in a shower. The kids are being tested for lead this week, and as far as I know, they get meds if you test positive. That's all I know. I don't plan on getting tested."

(Romper reached out to the city of Flint and the Flint police department for comment but did not hear back at the time of publication.)

"We can't use our water. My son was born in 2014 — he has eczema and the water made it worse. We've been OK, but we can't use our water. The water hasn't been tested, but I itch and he itches all the time. He complains about it and I always thought he was just talking until I started to itch too. I didn't even really notice it at first. I do baths for them every two days and I take bottled water and warm it up in a pot. We don't use tap water at all, period. But I don't know what they do at Head Start, they don't drink water at daycare. I wish I would have used baby water with his bottles and formula but his dad, you know. They said it won't show up until later in life, so I worry about that."

To donate or get involved in helping the city of Flint and the families this crisis has impacted, please visit helpforflint.com.