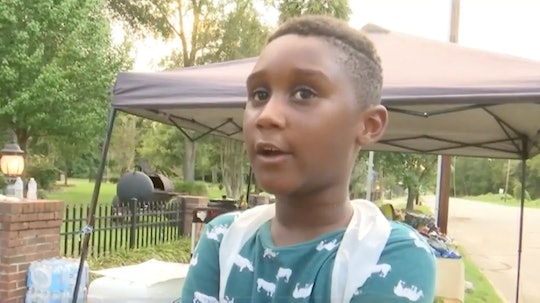 It seems like every time I so much as glance at the news, the anxiety I have about the state of our world skyrockets. (And I know I'm not alone.) Between inept political leaders, mass shootings, natural disasters, and more, it's easy to feel defeated and helpless. Every once in a while, though, a headline catches my eye and gives me all the feels — but in a good way. Like the fact that a 6-year-old boy donated Disney trip money to Hurricane Dorian victims. Because maybe there is hope for our future after all.

For over a week now, Hurricane Dorian has threatened the East Coast with varying degrees of intensity — ranging from a level 5 to a level 1 hurricane. After pummeling the U.S. Virgin Islands and the Bahamas, Dorian nicked Florida, grazed along Georgia and the Carolinas, made contact with the Mid-Atlantic coast, and is now heading toward western New England, the Washington Post reported.

Ahead of Dorian's arrival, plenty of residents in affected areas evacuated their homes — whether by official order or by choice. One little boy in South Carolina decided to step up to help evacuees traveling through his town. And his story is melting the cold, dead hearts of people across the nation.

See, Jermaine Bell had been saving up money to take his family on a trip to Animal Kingdom, CNN reported. The plan was to spend his seventh birthday at Disney World. Instead, the big-hearted 6-year-old decided to purchase hundreds of hot dogs and give them away to Hurricane Dorian evacuees as they passed through Allendale, South Carolina. He set up his hot dog stand along a busy road, also offering free water and chips.

"The people that are traveling to other places, I wanted them to have some food to eat so they can enjoy the ride to the place that they're gonna stay at," Jermaine told CNN affiliate WJBF.

Oh, my heart. Just look at this sweet soul pitching in with his little apron.

As a result of his selflessness, it looks like there's a chance Jermaine might be getting that trip to Disney after all. A GoFundMe campaign has already raised more than $2,000 to send the Bell family to Disney World. Additionally, the official Twitter account of Delta airlines commented on CNN's tweet of the story, writing, "Someone as amazing as Jermaine Bell deserves a fairy godmother. Can you DM us his info? We’d love to take him to Disney World."

Plenty of other Twitter users rallied behind Jermaine and his family, calling for Disney to step up and make it happen on their end. One person commented, "What an amazing young man! He’s 6! 6 years old! Come on @Disney let’s help get this compassionate young man’s dreams come true!"

Yet another Twitter user implored, "At just 6yo, he's so compassionate! DISNEY SHOULD make his dreams come true!"

Whether or not the Bell family ultimately makes it to Disney World for Jermaine's seventh birthday, this little guy's parents should be extremely proud. I don't know too many 6-year-old's who would be willing to pass up a trip to the "happiest place on Earth" just to give away a bunch of hot dogs to strangers. One thing's for sure: There's definitely plenty of hope left in this world.