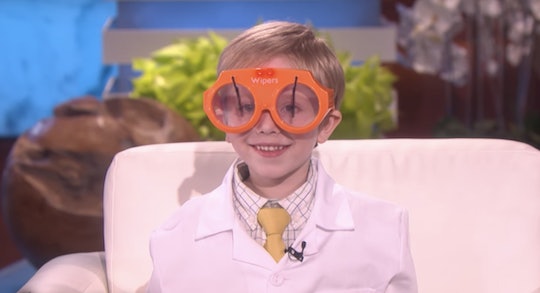 This 6-Year-Old Has A Better Podcast Than You

Move over, Bill Nye. There's a new science guy in town. Well, perhaps science "kid" is more accurate, given that Nate Butkus is only 6. But this 6-year-old's science podcast is the only thing you need to be listening to right now. It's as adorable as you'd expect and surprisingly informative.

Nate has loved science ever since he was 3 years old, so, at the ripe old age of 5, he decided to do something about it. He started making episodes of the accurately named The Show About Science with a little help from his parents. (His dad is a former recording engineer, and his mom was his first guest.) Now, 28 episodes later, his explorations of scientific topics running the gamut from climate change to bat biology are downloaded roughly 4,000 times per episode, and he's had the chance to show off his science knowledge (and on-point lab coat fashion) on The Ellen Degeneres Show.

Sure, Nate's laugh is so cute, it probably makes puppies jealous. And yes, every show features some sort of gem like Nate's recent, "Okay folks, The Show About Science is complete. Dad, you can shut the recording off." But maybe the most wonderful thing about Nate's science podcast is the sheer joy he takes in learning, and how it translates to both his guests and his audience. On each segment, he interviews an adult scientist about their area of expertise, and because these scientists have to explain the concept in such a way that it translates to a 6-year-old, the discussions are anything but dry.

Plus, Nate asks the best follow-up questions, like whether he could use the DNA editing tool CRISPR to actually create the spiky, winged monster he'd designed for a homework assignment, or if baby alligators get headaches.

In case all of this isn't enough to get you to stop whatever you're doing and subscribe to The Show About Science right now, here are a few more facts about Nate, as gleaned from his interview with Ellen Degeneres. He keeps protective sandstorm goggles around just in case he ever goes to Arizona! If he temporarily forgets what he's going to say, he does a drumroll to buy himself time! He wears a tie to school every day! He's really into bobbleheads, and got one of himself that he proudly showed off on live TV like it was a freaking Oscar.

And, as he told The Daily Dot in an interview last year, he really just wants to spread the joy, and help all the people who listen to his show "get a love for science."

Seriously, what are you waiting for? Subscribe to The Show About Science now.