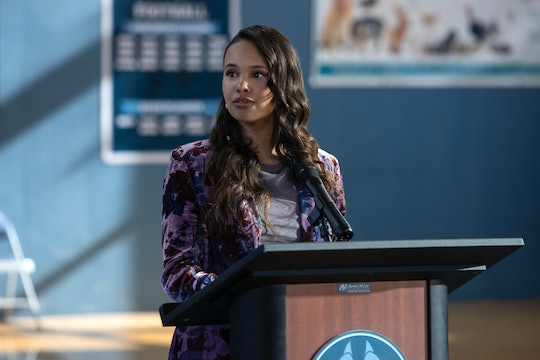 13 Reasons Why released its third season this summer, with a brand new character narrating life at Liberty High as an outsider. The series opted for deposition-style storytelling in Season 3, with most of the events playing out as Ani Achola (Grace Saif) gave a statement to police. As the season continued, it became increasingly clear Ani was hardly a reliable narrator, which was finally confirmed by the shocking reveal in the final episode. Now, 13 Reasons Why theories for Season 4 are already taking over Reddit, thanks to some carefully placed cliffhangers in the Season 3 finale.

Warning: Spoilers for Season 3 of 13 Reasons Why ahead.

In the aftermath, the biggest questions now surround what Winston Williams (Deaken Bluman) will do with the information that Monty was actually with him at the time he was accused of murdering Bryce. And what was the deal with that off-screen death? Is Monty really dead at all? Plus, what will it mean for Tyler Down (Devin Druid), Clay Jensen (Dylan Minnette), and Tony Padilla (Christian Navarro) that the guns from Spring Fling were discovered by a fisherman dragging the river? There are a ton of questions laid out for Season 4, and fans have a lot of ideas for how they might be answered.