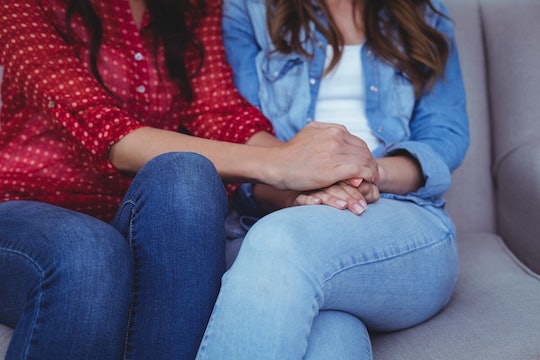 7 Basic Rules For Talking To Someone With PPD

When I had postpartum depression (PPD) at the end of 2006, I wasn't prepared for all the ways my life would change. As if having a baby and becoming a new mom weren't already hard enough, I had this storm cloud hovering over me. It was dark, cold, and isolating. Plus, people didn't know what to do or say, so I felt like something was wrong with me; something I should be ashamed and embarrassed about. It's not really anyone's fault, really, because most people don't know the basic rules for talking to someone with PPD. Still, if they had, I think I would have asked for help a lot soon or, at the very least, felt understood.

My postpartum depression was gradual. It snuck into my life as a new mom and ate away at all the promises I had made my baby girl (and myself). For awhile I thought if I just persevered it'd go away and I'd somehow get better on my own. I've battled bouts of anxiety and depression since I was a child, and I've overcome those periods so many times, so I didn't see how this would be any different. I was so, so wrong. Not only is PPD something I had no control over, it changed who I was as a mother, partner, and woman. The old me became unrecognizable in so many ways, and I started to wonder if I'd ever regain the pieces of myself postpartum depression was taking away from me.

Months later and as my postpartum depression raged on, it became clear I needed help. Not only was it not going away, but I started to have unwelcoming thoughts about how much life would be better for my daughter if I weren't here anymore. My gynecologist was kind and compassionate enough to guide me towards the help I needed (something I'll never forget), and while it took some time to find my footing, I eventually did. Once I was out of that darkness, the guilt overwhelmed me. How could I be so lost for so long? How could I let something fracture the bond I could've had with my new baby?

Unfortunately, I only realized these answers after treating the PPD. It was a long, painful journey but, in the end, I'm still here. Throughout that journey and during the process of navigating PPD, I was surrounded by people who didn't seem to know how to acknowledge this volatile disorder, let alone understand it. With that, here are some basic rules for talking to someone with PPD. They may make all the difference in someone's dark world.

More Like This
What Is RSV?
The Best Halloween Family Pajamas To Match Your Boos
30 Adorable Baby Halloween Costumes, From Animals To Avocados
15 Breast Pump Bras For Hands-Free Pumping