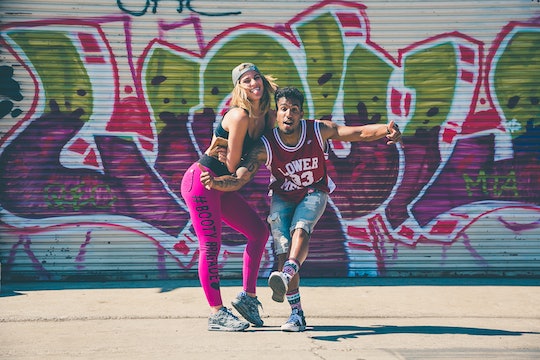 Unless you've been living under a rock, you've probably heard of Zumba — the dance fitness craze that's been around since the late '90s. Founded by Colombian dancer and choreographer Alberto "Beto" Perez, there are now Zumba classes all around the world and, while maybe not as trendy as they once were, they're still a great workout thanks to the calorie-burning power of dance. But if you've yet to try these classes, it could be intimidating to step foot in a Zumba studio. Especially if you're worried about committing on e of the many beginner Zumba mistakes all first-timers make.

In order to find out some of the biggest mistakes that Zumba newbies make, Romper talked to Gina Grant, a Zumba Education Specialist whose passion for the fitness regimen began in 2002, and Lana Herzig, a NASM certified personal trainer and Zumba instructor with more than 23 years of dance training and performance experience.

The main thing you need to know before going to your first Zumba class is that they are, "good for literally everybody," according to Grant, and "a party," according to Herzig. If you're intimidated to try your first class, check out these seven beginner mistakes that everyone makes during their first time in Zumba — and, most importantly, how to avoid them.