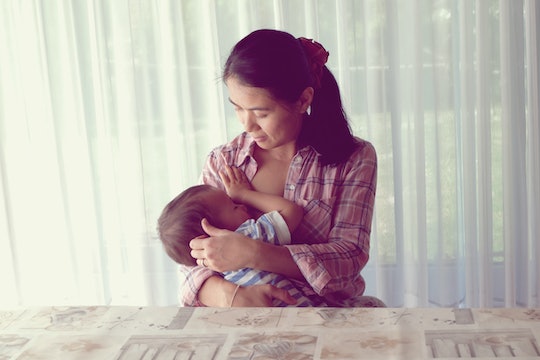 7 Fascinating Breastfeeding Traditions From Around The World

Unlike formula, which was invented in the 19th Century, breastfeeding is believed to have been around since, well, prehistoric times. Researchers have found evidence of at least seven months exclusive breastfeeding in the tooth of a 100,000-year-old Neanderthal child, according to Science. What's more, references to breastfeeding have been found in ancient Greek myths and Egyptian hieroglyphs. However, despite how common breastfeeding may appear to have been throughout history, many aspects of its practices, including how it's done, when babies are weaned, and how it's viewed by society vary. In fact, according to Slate, anthropologists believe that "human culture and lifestyles have influenced the practice of breastfeeding since the beginning of civilization."

More Like This
Can You Burp A Baby Too Hard? A Pediatrician Shares Tips For Gassy Tummies
Andy Cohen's 3-Year-Old Son Ben Has Officially Taken Over An Important Hanukkah Tradition
Disney Introduced Its First Openly Gay Teen Character In Strange World
New Study Finds Brains Of Teens Who Lived Through The Pandemic Aged Faster