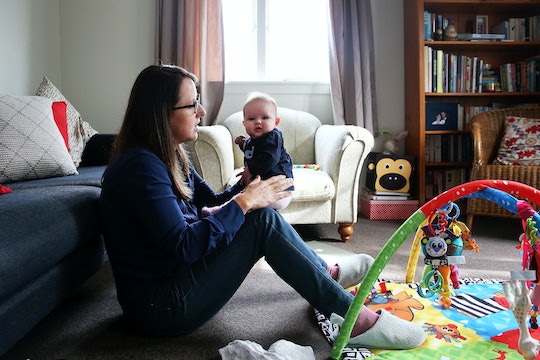 Stacks upon stacks of research have proven that maternity leave benefits workers and their children. Yet, lawmakers continue to rally against enacting a federal law that would mandate paid leave for new parents. Many of the anti-leave folk believe that offering moms — and dads — paid time off would hurt businesses and workers. But the facts don't support those claims. In fact, here are seven common arguments against maternity leave, debunked.

There's no doubt that the United States continues to fall far behind when it comes to paid maternity leave. According to the Pew Research Center, the United States is the only nation, out of 41 countries, to not offer paid parental leave. Compare that to Estonia, which offers new parents up to a year and half of paid leave. Or New Zealand, which offers up to two months — the smallest amount of paid leave available among the 40 countries.

Parental leave boosts productivity and employee retention, and is generally good for business. Yet, myths about maternity leave continue to prevail, despite being debunked over and over again. And those myths keep states and companies from enacting maternity leave laws, which, in the end, only hurts employees, their families, and the businesses themselves. So the next time you get into an argument over parental leave, remember to keep these seven facts in mind.

Common Argument No. 1: It's bad for business

The opposite is true: Paid parental leave policies actually help businesses. Although there is a cost to providing the benefit, most employers report seeing greater retention of employees and higher productivity, according to Fast Company. (That cost, by the way, comes out to less than $1 a week, Fortune reported.) And, according to Fortune, a series of reports found that paid leave policies didn't hurt a company's bottom line. An overwhelming majority of employers in California and New Jersey have reported a positive to no adverse effect on their businesses.

Common Argument No. 2: It's unfair to fathers and workers without children

It's disingenuous to say that maternity leave is unfair to fathers and workers without children. What's unfair is leave laws are designed in the United States. Companies and states create these policies within a patriarchal framework, which places the responsibility of child-rearing solely on women. And not only do many of these policies leave out fathers, they discriminate against same-sex parents. That's why advocates of paid leave are pushing more and more for universal paid parental leave policies that encompass all types of families (there are also those pushing for paid family leave to cover childfree employees who need time off to care for a loved one). In fact, of the 40 countries that provide paid leave, all of them offer the option to both mothers and fathers. Really, at the heart of this argument is a disagreement over the name.

Common Argument No. 3: It's manipulated by women who repeatedly have babies

I can't even begin to debunk this argument because it's such a ridiculous one to make. Pregnancy is literally a months-long process that's brutal on the body. Some people love being pregnant; many others don't. But pregnancy is not something that can happen on the drop of a dime. To suggest that workers will willingly put their body through nine months of hell in order to take three months off defies all logic.

I often see this argument against paid maternity leave associated with calls for deregulation, free markets, and tax cuts (just read this CNN opinion piece). The faux concern for a woman's career is just a cover for skirting social responsibility. More so, the argument skews available research. There are plenty of studies that prove paid maternity leave is beneficial for workers and their families because, among other things, it helps parents stay in the workforce for longer. It's not that paid leave doesn't have a downside: According to Motherly, an investigation by the New York Times found that many women who took leave suffered pay cuts and career setbacks. But that wasn't because of the policy itself; it was due, in part, to employers discriminating against workers in order to avoid covering the costs of maternity leave. In other words: Paid leave doesn't hurt women. Employers do.

Common Argument No. 5: The United States already has a family leave act

The Family and Medical Leave Act is a necessary piece of legislation, but it's a catch-22 for working parents. Under the 1993 federal law, employees have a right to up to three months of leave to take care of a new child or sick loved one, or to recover from a serious condition. But those 12 unpaid weeks, which means workers who need time off but cannot afford to lose pay are stuck between a rock and a hard place. Employees also have to meet strict requirements in order to benefit from the law — in fact, that's only about 60 percent of the workforce, according to What To Expect. Conversely, the National Partnership for Women and Families estimated that only 11 percent of the U.S. workforce actually have access to paid leave. When a parent takes leave without pay, they risk their economic stability, creating stress and harming their mental and physical health.

Common Argument No. 6: Parents will just use it to write their novels or travel the world

This is not how maternity leave works. Maternity leave is not only a time for parents to bound with their new children, it's also gives their body time to heal after childbirth. It takes up to six weeks for a person to heal after a vaginal delivery; if you had a C-section, recovery can take even longer. Your body is traumatized by pregnancy and delivery, and needs that time to heal without excess strain or stress. Put it another way: Taking maternity leave is no different than someone taking time off to recover from an accident.

Common Argument No. 7: Becoming a parent is a choice that company's shouldn't have to pay for

For many people, becoming a parent is a choice. For many others, it's not. But whether or not you view parenthood as a choice shouldn't determine whether or not the United States passes a paid parental leave law. Paid maternity leave benefits single parents and parents from low-income households. It gives them the opportunity to recover and take care of their family without risking their economic security. When you fight against paid leave, you are further marginalizing workers who are already vulnerable to the country's poor labor and wage laws. In fact, a 2011 report from the Human Rights Watch revealed the depths to which a lack of paid leave hurts workers and their children. The main takeaway: Employees with little to no paid leave went into debt, were at risk of losing their job, and were more likely to delay infant and postnatal care.

There is enough evidence to show that paid maternity leave — and, more broadly, paid parental leave — is beneficial for the U.S. economy. It's about time the country catches up with the rest of the world, and drop these debunked arguments by the wayside.

More Like This
Brandi Carlile Is “Finally Cool” To Her Two Adorable Daughters
Fun, Sexy Maternity Lingerie, For When The Mood Strikes
Maria Menounos Reveals She's Going To Be A First-Time Mom After A Decade-Long Journey
Melissa McCarthy Stars In A Hilarious Super Bowl Ad That Will Resonate With All Moms
What Parents Are Talking About — Delivered Straight To Your Inbox