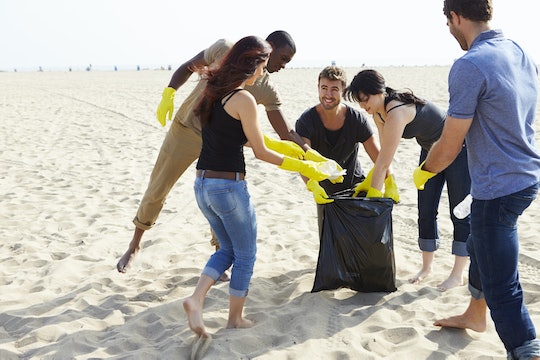 7 Easy-To-Do Earth Day Activities For Adults, Because Every Little Bit Really Does Count

It's that time of year again: Earth Day 2018 is just around the corner (on April 22, to be exact), which means kids in schools everywhere are probably making eco-themed art projects using repurposed materials at this very moment. But Earth Day isn't just for kids — grown-ups can get in on the action, too, and sometimes end up making a real difference in the process. Whether you organize an event to help save the planet or make a small sustainable change, every effort counts. So what are some Earth Day activities for adults who want to do their part?

Every year, Earth Day has a different theme, and the focus for 2018 is "End Plastic Pollution," according to EarthDay.org. As the site explained, it's an incredibly important and timely campaign:

From poisoning and injuring marine life to disrupting human hormones, from littering our beaches and landscapes to clogging our waste streams and landfills, the exponential growth of plastics is now threatening the survival of our planet.

Just this February, for example, a young male sperm whale washed up on the shores of Spain with 65 pounds of plastic in his stomach (including dozens of plastic bags), as Live Science reported; a recent study in the journal Scientific Reports revealed that there are over 87,000 tons of plastic floating what's known as the "Great Pacific Garbage Patch," according to The New York Times.

With those horrifying facts in mind, focusing on curbing your plastic usage might not be a bad place to start this Earth Day! Here are some more ideas to get you going.