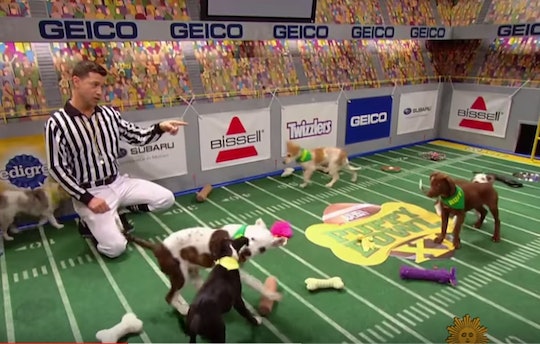 Super Bowl Sunday is just around the corner. And if you're anything like me, then you tune in purely for the pop culture aspect of it all — the live musical performances during halftime, the commercials, the meme-worthy moments, the Twitter commentary. Basically for any reason other than actually paying attention to the sport itself. With that said, I would gladly remained glued to the TV for the main event of the Puppy Bowl. (Because adorable baby animals and all.) So let's take a look at seven facts about the Puppy Bowl that might surprise you. Because a lot more work goes into this annual event than you might think.

In case you wanted to set a phone reminder or schedule your DVR to record, the 2019 Puppy Bowl will kick off at 3 p.m. (ET) on Sunday, Feb. 3 on Animal Planet. This weekend will mark year 15 of the popular event, according to People. And from the looks of it, Puppy Bowl XV is shaping up to be pretty darn epic — especially when compared to its "humble" beginning of 5.8 million views. (Can you believe 13.5 million people watched in 2014? Insane!) For example, did you know that ...

1. It started off as Yule-Log-esque-inspired joke.

According to Vox, the first-ever Puppy Bowl back in 2005 was designed specifically as counter-programming to the Super Bowl. However, the initial concept was suggested jokingly by Animal Planet executives. It was meant to look just like the Yule Log that you can watch during the holiday season. "Margo Kent, the executive producer for Puppy Bowl I, remembers that 'It was always a joke: How do you counter the Super Bowl? Let's just put a box of puppies up there and call it a day,'" Rolling Stone reported in 2014. "'It's not worth trying to go against the Super Bowl.'" Clearly, they were onto something; 5.8 million viewers tuned into the broadcast that first year.

2. All of the dogs are adoptable.

As People reported, every single one of the puppies appearing on the Puppy Bowl are adoptable. (And the event features a 100-percent adoption rate!) So not only are these little cuties endlessly entertaining for millions of people on Super Bowl Sunday, but the whole shebang effectively promotes adoption of rescue animals. It's win-win!

3. It's shot three months in advance.

Unlike the Super Bowl itself, the Puppy Bowl is not a live event. Seasoned Puppy Bowl referee Dan Schachner explained in 2015 that it's actually shot months beforehand. "The Puppy Bowl is shot about 3 months in advance. A lot of people don't know this," Schachner explained in an Ask Me Anything Reddit session, per Vox. "The reason why it takes so much time is the Puppy Bowl broadcast is a 2-hour event, but it is not a 2-hour event to film — it takes two full days to film. Reason being, we are trying to showcase as many different puppies as possible, and we want to rotate them in and out, and give them as many chances to have action on the field as possible!" He continued:

Additionally, there are 17 cameras shooting the action on the field at the same time. You can imagine, two days of shooting, 17 cameras, that is hundreds if not thousands of hours of footage that needs to be watched, logged, and edited.

Makes sense to me.

Sure, puppies are freaking adorable. But did you know that older dogs also have an opportunity to get some grid iron action? That's because Animal Planet also raises awareness for the adoption of older animals on Super Bowl Sunday, according to Us Weekly. That's because before the players take the field for the the Super Bowl, the Dog Bowl — which focuses on older dogs that are often overlooked at shelters — will air on Saturday, Feb. 2 at 8 p.m. (ET.)

5. Peanut butter is a key motivator.

According to The Washington Post, the secret weapon to get all of those cute puppies to cooperate is peanut butter. Wipe some on a camera, and viewers get a first-person look at what getting licked by one of the puppies is like. Peanut butter strategically located inside toys is a great motivator, too, according to Mental Floss.

As Vox reported, other species of animals first appeared on the sidelines to cheer on participants of the Puppy Bowl back in 2010. These cheerleaders have included chickens, pigs, hedgehogs, penguins, Nigerian dwarf goats, and Silkie chickens. This year, there will be capybaras, baby porcupines, and baby kangaroos, according to People.

7. The selection process is pretty extensive.

In order to be eligible for the Puppy Bowl, pups must be between 12 and 21 weeks old, vaccinated, well-socialized, and they must meet weight and height requirements, according to Vox.

And there you have it! A lot of time and effort goes into the Puppy Bowl each year — and so does plenty of behind-the-scenes work that viewers at home don't see. But I think most people would agree that it's all worth it in the end. Because puppies "playing" football is about as cute as it gets.