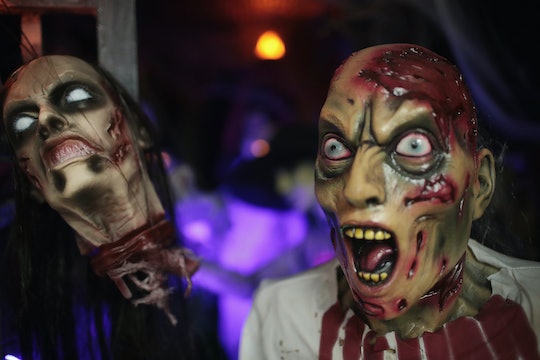 Halloween is a truly magical holiday for kids and adults alike, because it invites imagination, creativity, and dress-up like no other day. And some families take the bonding to another level entirely by dressing up in a group costume. Although 99.9 percent of these getups are simply adorable, there are a few family costumes to avoid on Halloween because they could be seen as problematic. But as long as everyone in your family just takes a second to think about their costume ideas, it should be fine.

For the most part, thinking twice about potentially problematic Halloween costumes is simply a form of courtesy. After all, most everyone just wants to enjoy the holiday. "The first thing that must be understood when talking about this complicated issue is that cultural appropriation on Halloween is not implicitly born of malice," wrote Mark Shrayber in Uproxx. "Mostly, it’s just people wanting to have fun." That said, there are countless ways to have fun with costuming that don't involve stereotyping someone else's culture, belittling people who are incarcerated, or totally scaring the daylights out of your kid for decades to come. Read on for a quick reminder of what costumes your family might want to avoid, then go out and have a totally fantastic Halloween.