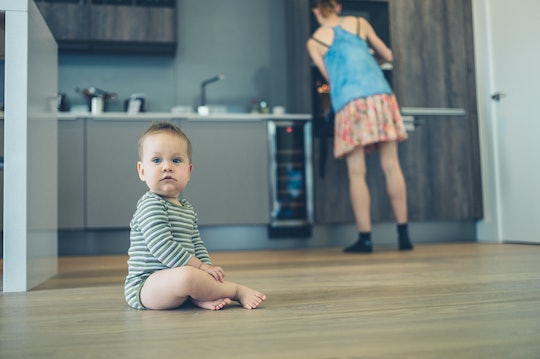 Not to sound glass-half-empty or anything, but your living space is a damn death trap. OK, I'm over-exaggerating. But you get the idea. Just think about the surfaces you touch, sit, and eat off of in your home. Now think about the number of potential toxins, germs, and viruses calling those surfaces home. It's enough to make you shudder. Throw a baby into the mix, and before you know it you're seeing danger all around you. The good news, however, is that if you familiarize yourself with household items that could make your baby sick, you'll be ahead of the game.

The Alliance for Consumer Health reports that children are capable of touching (and retouching) "over 300 surfaces in just 30 minutes." As a result, according to the same site, "The average toddler gets six to eight colds a year. School-aged children can get as many as 12." And since children are two to three times more likely than adults to get the flu, according to The Alliance for Consumer Health, it's important to sanitize and disinfect your home as often as possible.

When it comes to babies, and specifically the newly mobile and highly curious, those pesky germs lingering in places you didn't think to sanitize, or don't sanitize often enough, can pose a significant threat. Mary Anne Jackson, M.D., a pediatric expert at Children's Mercy Hospital and Clinics, in Kansas City, Missouri, tells Parents, "In the first year, babies come down with about six to 12 infections, most lasting seven to 10 days." So with that in mind, and because it's better to be safe than sorry, here are some of the household items you probably didn't realize could make your baby sick:

More Like This
Can You Help Your Baby’s Hair Grow?
First Look: The New Jujube x Lilo & Stich Collaboration
Here's When Your Baby Might Start Sleeping Through The Night For Real
Baby Not Napping At Day Care? These Reasons May Be Why