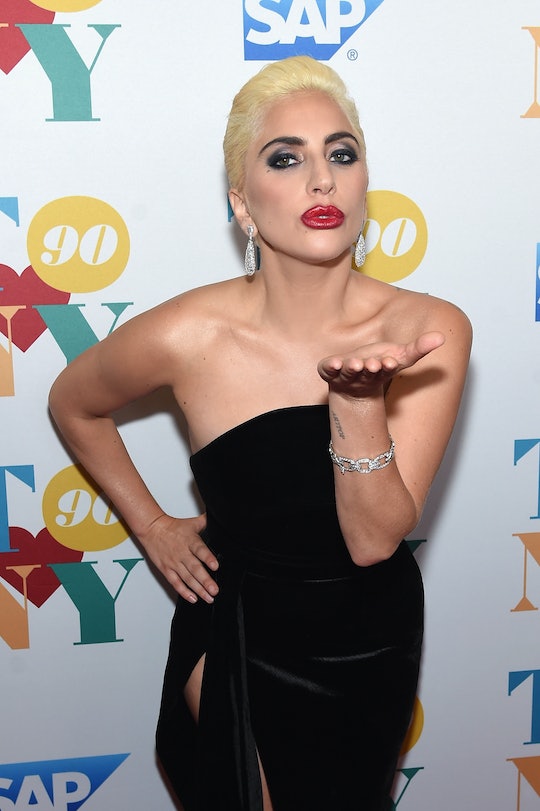 7 Lady Gaga Theories On 'AHS: Roanoke' That Could Explain Her Mysterious Character

When Season 6 of American Horror Story started airing, it seemed as though Lady Gaga would have a much less central role than she did in AHS: Hotel. She spent the first few episodes of the season creeping around in the background, but Episode 4 saw her take on much greater prominence that seems to imply her importance to the story will only grow. The episode was thick with backstory, and that was especially true for Lady Gaga's Witch of the Woods (called Scáthach in closed captioning), whose history was laid out in one of many flashbacks. Knowing where she came from doesn't actually explain much about her, so these AHS: Roanoke theories about Lady Gaga seek to flesh out her character a little more.

Right now, the Witch's motivations are a total mystery. The other villain of the season, the Butcher, is easy enough to understand: she wants power and control over her followers no matter the cost to herself or to them. But what does the Witch want? So far she's been shown helping the Butcher achieve all her aims, but it's not entirely certain what the Witch gets out of that. She's also been shown trying to entice Matt to join her followers, but again: to what end? Fan theories may make it a little bit easier to understand where she's coming from and what she ultimately wants.

The Witch is a descendent of Druids who was able to blend old magics with new ones when she came to the New World. That makes her an incredibly powerful witch, and even (possibly) an immortal one. She may very well be the oldest ancestor of the witches from AHS: Coven and what's more, she might be the oldest, original Supreme. That could explain her skill at different kinds of magic, as well as her crazy amount of power.

Though psychic pal Cricket dismissed the idea that the Roanoke settlers were worshipping the devil, it's possible that they might have been after all: Lady Gaga's Witch could be Satan. She does ask for the Butcher's soul before helping her out in the woods, and the straw dolls popping up all over the place bear a similarity to figures intended to ward off the devil. The Witch's constant craving for more followers and more blood sacrifice could just be the Devil building up her collection of souls. "666" also has a distinct meaning in the world of horror, and Season 6 has been playing up its number since the promotional images started.

She Wants to Conceive The Antichrist

The Witch's thirst for Matt seems a little out of left field; if all she wants is more followers, why isn't she going after Matt and Shelby? Why is she focused so much on him? The answer could be because she wants to conceive a child. Horrific pregnancies have been a staple in horror and in AHS since the beginning, so there's a good chance the show wouldn't miss out on bringing another demon baby into the world.

Reddit user ash_dub69 proposed the theory that Witch is actually a maenad, one of the followers of the Greek god Dionysus. Maenads were always women, and they existed in a state of frenzy; the name actually means "raving ones." They would get drunk and go wild during their rituals, which could often culminate in acts of extreme violence. While aesthetically the Witch would fit right in with the maenads, she seems to have more of a calm control than a frenzied style.

Episode 4's subtitles referred to the Witch as "Scáthach," who is a real figure in Celtic mythology. She is a warrior who is known to train others in the art of combat. While there hasn't been much active warfare from the Witch, she doesn't shy away from violence and she did take the Butcher under her wing as a protégée. She also came from some kind of Celtic background. The Scáthach of myth was also known to guide departing souls into the afterlife, though her methods probably weren't as hands-on as the Witch's. If the Witch is indeed Scáthach, then it's possible the show will twist the myth to suit its purposes a little more.

Shelby And Matt Are Her Followers Now

While it doesn't explain the Witch's backstory, one theory proposes that the real Matt and Shelby (the ones shown during interview segments) are actually her followers now. They're working to lure the film crew and actors to the house so that they can be sacrificed to the Witch. It would definitely be an interesting twist, and a big twist is set to happen in Episode 6.

This theory isn't related to Gaga's current role, but it does provide more connective thread between the seasons. When Lee's first child Emily is brought up, Lee explains that Emily disappeared after Lee left her alone in the car for five minutes while she ran into the store. Kidnapping children left alone (and specifically left alone in cars) is the M.O. of last year's the Countess, who collected abandoned children to take care of herself. The Countess could have kidnapped Emily as a nod to previous seasons.

The only thing that is certain about the Witch is that she seems to be the source of everything this year, making her a difficult threat to defeat.