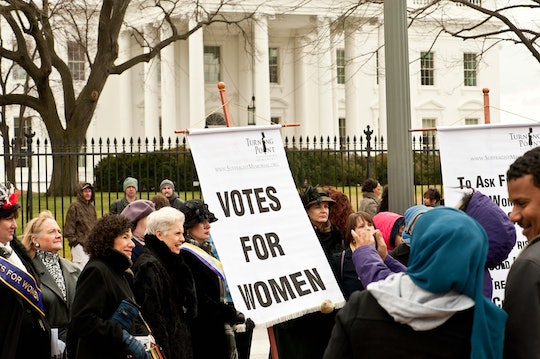 For the past 45 years, Aug. 26 has been Women's Equality Day, a day commemorating the anniversary of the 19th Amendment, which, according to TIME, gave American women the right to vote. It's a celebration of course — a day to remember all of the women who have fought tirelessly for women's suffrage and for greater women's rights — but it's also an important reminder of how much work there is still left to do. While it's impossible to create an exhaustive list, these seven mothers who have fought for women's equality are great examples of what Women's Equality Day is really about.

And they also serve as reminders to continue looking ahead and striving for better, particularly when it comes to things like equal pay, reproductive rights, and discrimination — especially for women of color, who generally earn even less on a man's dollar than their white counterparts, according to New Republic.

Without Bella Abzug, a mother of two children, today literally might not be Women's Equality Day. That's because, according to TIME, Bella Abzug — a Democrat from New York who served as a congresswoman for six years after spending two decades as a civil rights lawyer — was the one who introduced the bill to establish the day itself, which passed in 1971. But that's certainly not all she accomplished. Abzug co-founded the National Women’s Political Caucus to advance the role of women in politics along with other notable women's rights advocates like Gloria Steinem and Betty Friedan. And best of all, she did it loudly, and unapologetically, proving that you didn't have to be quiet and agreeable simply because that's what people expected of you.

A discussion of women's rights and suffrage wouldn't be complete without discussing Ida B. Wells. According to Associations Now, Wells was born into slavery in 1862, eventually becoming an investigative journalist, suffragist, and early civil rights leader — not to mention a mother of four children. According to Biography, Wells was part of the National Equal Rights League, where she fought for equal hiring practices for women, and she also created the first African-American kindergarten in her community. In other words, Wells pretty much never stopped fighting for justice.

New York Democratic Rep. Carolyn Maloney has been fighting for close to 20 years to see the Equal Rights Amendment passed in Congress, according to CNN. But that's not all. In her career on Capitol Hill, Maloney's work has involved fighting sex trafficking and sexual violence on college campuses. She has also introduced bills designed to make child care and family and medical leave more accessible for parents, and, in one particularly notable moment in 2012, stood up at a hearing where issues such as birth control were being discussed by a panel of only men, and said, "What I want to know is: Where are the women?"

Maloney went on to say, according to CNN,

When I look at this panel, I don't see one single woman representing the tens of millions of women across the country who want and need insurance coverage for basic, preventative health care services, including family planning. Where are the women?

Even if you aren't super knowledgeable about feminism or feminist history, chances are, First Lady Michelle Obama has said something incredible about women's rights that has resonated with you. In fact, just watching her speak is often a master class in how to be a strong, eloquent woman who makes no apologies for standing up for what's right. But in June, Obama took that one step further and organized The United States of Women summit at the White House, where things like pay equity, creating opportunity for women and girls, and healthcare, and civic engagement were discussed, according to The Washington Post.

Facebook chief operating officer and Lean In author Sheryl Sandberg has long been an advocate for women to push for greater leadership roles in their careers, but she's not just talking about it from a philosophical point of view. According to The Washington Post, when Sandberg attended the World Economic Forum in Switzerland earlier this year, she argued that gender diversity in the workforce isn't just a "good" thing to do, it's a really smart thing to do, because gender equality helps everyone, not just women. And she also pointed out how entrenched gender biases really are, lest anyone think they're a made-up problem:

[It starts] with babies crawling. Mothers will systematically overestimate their son's crawling and underestimate their daughter's...When men succeed, we—meaning the person and other people—attribute that success to the man's core skills. He succeeded because he was great. He has skills. With women, we attribute that success—both themselves and others—to working hard, help from others and getting lucky. That's a really big difference.

Comedian Amy Poehler might be hilarious, but she's totally serious about encouraging girls to expect more and to reach their potential. And one of the ways she's helped to do that? By launching the #AskHerMore campaign ahead of the 2015 Golden Globe Awards, highlighting the fact that women being interviewed were often exclusively asked questions about their appearances, while men were asked questions about their performances, according to The Independent. And since then, the conversation has continued, reminding us all that, while feminism has come a long way, there are still far too many seemingly-innocent daily occurrences where the accomplishments of women are totally sold short.

Shonda Rhimes is pretty much the queen of television these days, with three hit shows to her name, and best of all, she is unapologetically a total boss about it. In an interview with Elle in 2015, Rhimes discussed the lack of diversity on TV, and why it's important that she fight that with her work:

The entire world is skewed from the white male perspective. If you're a woman, they have to say it's a female-driven comedy. If it's a comedy with Latinos in it, it's a Latino comedy. 'Normal' is white male, and I find that to be shocking and ridiculous.

And when she was honored at the Global Women's Rights Awards in 2015, Rhimes had even more to say about contemporary feminism and the experience of women, according to Variety:

There is still a lot that is frustrating on a day like Women's Equality Day, and it can easily feel as though there is so much that is still unfair, and that there is still so far to go — and certainly there is. But the uplifting message is that there are still women everywhere (far more than could ever even sort of fit into one internet listicle) who are working in all sorts of ways to try to better the world for women and girls, and to work to bridge the still-giant gap that exists between genders. It might not be even close to where it should be, but it's come a long way, and that alone is a fact to be celebrated.