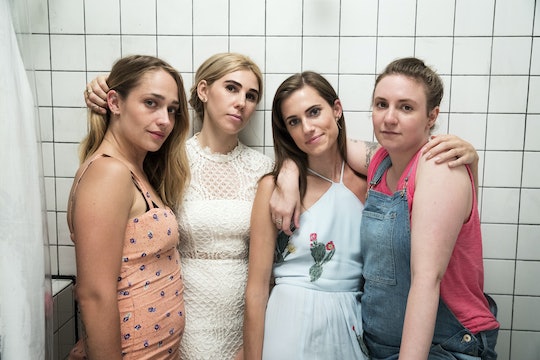 Rewatch These ‘Girls’ Episodes Before The Series Finale

After six years of misadventures, poignant revelations, cringeworthy moments, and painful conversations, Girls is coming to an end. The coming of age of its four main girls went sideways more often than it went forward, each woman going on a twisting journey towards adulthood that usually took two steps back for every step forward. Hannah, Jessa, Marnie, and Shoshanna were messy and self-involved most of the time, but their attempts to find some kind of meaning and understanding in their lives could resonate deeply with audiences. For all its ups and downs, Girls will be missed. But to prepare for saying goodbye, here are some must-see Girls episodes to watch before the series finale.

As much as the girls on Girls have changed, they've also stayed the same. From Season 1 to Season 6, they made bad decisions and learned life lessons they sometimes promptly forgot, but they also made strides in figuring out just what they wanted from the world. They got married, got divorced, had affairs; they landed one improbable job after another and somehow floated by on mysterious salaries. The addition of Elijah to the cast was a gift to us all. For all the show's ridiculousness (and the very valid qualms that have been raised about it), it's always been able to provide both humor and pathos — sometimes at the same time. And these are the episodes that more than proved this fact.

As the episode that started it all, the Girls pilot is worth rewatching just to see how much the show — and the women it's centered around — have changed.

Season 1, Episode 7: "Welcome to Bushwick a.k.a. The Crackcident"

Shoshanna accidentally smoking crack and then running around Brooklyn in her Spanx is basically an iconic moment from the show that definitely deserves another look. It was also the episode where Hannah and Adam's relationship first went to the next level.

A controversial episode at the time it aired (for very frustrating reasons), "One Man's Trash" was one of the show's first significant bottle episodes — something Girls would do at least once a season. Considering how much attention it garnered, "One Man's Trash" ought to be revisited with fresh eyes now that some time has passed.

Few things were as satisfying as watching all four girls tear into each other over their various shortcomings, and it felt like catharsis for them and for the audience.

I was one of those people who thought a Marnie-centric episode might end up truly unbearable, but "The Panic in Central Park" was a beautiful bottle episode that saw the unexpected return of Charlie as the catalyst that pushed Marnie to make some serious decisions about where her life had gone.

"The Bounce" was a much-needed Elijah-centric episode that followed him working through some career and relationship issues while also delivering a hilarious-but-killer rendition of the song "Let Me Be Your Star" from the hit musical Bombshell from the hit show Smash. Meanwhile, Hannah dealt with telling her baby's biological father about her pregnancy and the subsequent fallout.

"Goodbye Tour" could have easily been the last episode of Girls. It gave each of the women closure with each other in a refreshingly mature way as they realized that their friendship was falling apart because they shouldn't actually be friends anymore — and that was OK. The episode acknowledged what they had meant for each other and then let them move on.

The finale of Girls is fast approaching, but there are six years worth of episodes to rewatch to prepare you for the end.