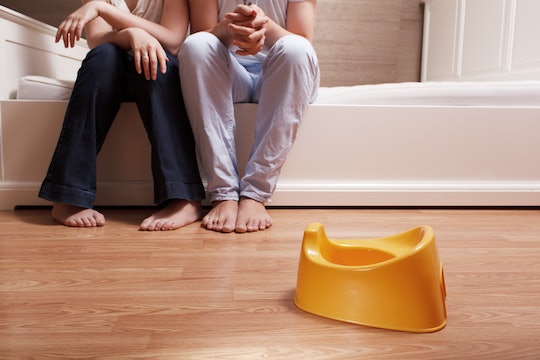 Just when you thought being a parent couldn't get more exciting — aka unpredictable and frustrating — your little one hits the milestone where they're ready to abandon their diaper. But just because they've shown an interest in toilets doesn't necessarily mean it's going to be a smooth transition. Ask any parent, and I guarantee they'll have at least one horror story about bed-wetting or rogue bowel movements. But don't let the stories get to you, because there are plenty of myths about nighttime potty training that just aren't true. Sure, making the move from diapers to big kid underwear can be daunting, but it's not as scary as some people make it out to be.

When my partner and I first began potty training our son, it was something straight out of a Monty Python skit — complete with prat falls and silly walks. It was a bit of a learning curve, for sure. Bedtime also became a bit of an ordeal, since we had to assist him sometimes in the middle of the night. When I vented to my fellow parents, they all chimed in with wildly varying timelines, expectations, and rules. So how do you know what's fact or fiction? Check out these myths about nighttime potty training to put your mind at ease.