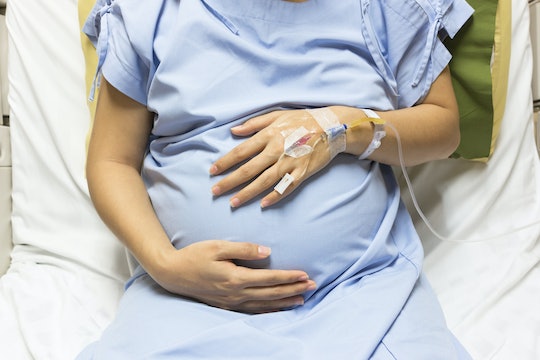 7 Myths About Pitocin Every Pregnant Woman Should Ignore

Most pregnant people spend a lot of time thinking about — and worrying about — how childbirth will go. If you need to be induced to deliver your baby safely, or protect your health, it can be really scary. To make matters worse, induction gets a bad rap, especially from people who think that it's "better" to go into labor on your own or have a medication-free birth. For example, an internet search for Pitocin — a medication used for inducing labor — can uncover a ton of scary myths about Pitocin that, fortunately, just aren't true at all.

According to the American College of Obstetricans and Gynecologists (ACOG), oxytocin is a hormone that your body produces naturally during labor. Pitocin is the brand name of synthetic oxytocin that is commonly used to induce and augment labor by causing your uterus to contract. Although many people suggest that Pitocin contractions cause significantly more pain than other contractions, according ACOG that totally depends on the dose used and how your body responds to the medication. The other commonly-believed claim that Pitocin increases your odds of a C-section isn't true either, according to a study published in the Canadian Medical Association Journal. While a few studies did show a link between Pitocin use and decreased breastfeeding rates, the studies didn't account for whether or not mothers planned to breastfeed in the first place. The same studies failed to take into consideration the fact that many other barriers might prevent a person from breastfeeding, and those barriers have absolutely nothing to do with Pitocin.

Not only are these myths, like not being able to bond with your baby after receiving Pitocin, devoid of real evidence, they're actually really harmful. There are many ways to bond with your baby, for example, that don't involve going into labor on your own, which any adoptive or non-gestational parent can confirm. To learn more about Pitocin, its really unfair reputation, and to put your mind at ease if you need it to safely deliver, read on: