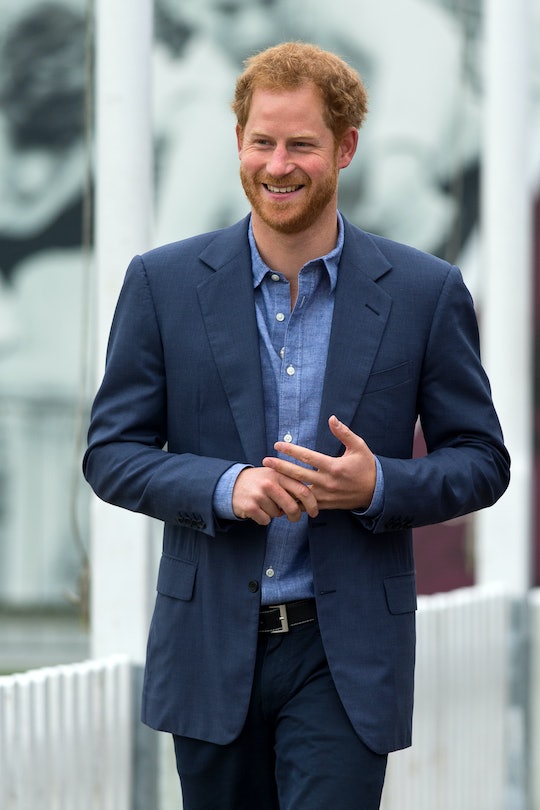 Now that Prince Harry, Duke of Sussex, is married, all that many fans can think about is when he and Meghan, Duchess of Sussex, will announce that they are expecting their first kid. And since it could be a little while before that piece of royal news drops, now seems like a good time to remind each other that evidence of Prince Harry being good with kids is all over the internet. He is an uncle to three royal tots, after all. So in celebration of the future father (hopefully), please allow me to reminisce over seven of Prince Harry's best uncle moments with Prince George, Princess Charlotte, and Prince Louis of Cambridge.

Prince Harry became an uncle when Prince George was born, which was on July 22, 2013, according to Biography.com. When Prince Harry's brother Prince William, Duke of Cambridge, and his wife, Catherine, Duchess of Cambridge, welcomed Prince George, Prince Harry's place in the line of succession was bumped from third to fourth. Since then, Prince Charlotte and Prince Louis' births have pushed Prince Harry even further down the list, where he currently sits at sixth in line to the throne. But Prince Harry doesn't seem to be bothered by his decreasing chances of becoming king — more on that in just a moment.

1. When He Called His Niece & Nephew The "Most Amazing"

In a June 2017 interview with journalist Angela Levin, Prince Harry said that he had no hard feelings about his niece and nephew bumping his spot because they are so amazing. He said, according to the Daily Mail:

The reason I am now fifth is because of my nephew and niece and I could never wish them away ... They are the most amazing things ever.

2. When He Dished On 5-Day-Old Prince George

Just five days after Prince George was born, Prince Harry told the BBC that he had already cuddled with his first nephew. He also told the outlet that it was "fantastic to have another addition to the family," and he joked that when they met, Prince George "was crying his eyes out."

3. When He Tried To Start A New Lucrative Career

Additionally, after Prince George was born, Prince Harry joked about what kind of babysitter he would be, should his brother and sister-in-law need some help. He told the BBC at the time:

I only hope my brother knows how expensive my babysitting charges are.

4. When He Joked About Prince George Stealing His Spotlight

During an interview at the 2016 Invictus Games (which Prince Harry created), CBS This Morning co-host Norah O'Donnell joked to Prince Harry that his nephew was starting to upstage him. With a smile and mock frustration, Prince Harry responded:

5. When He Just Wanted To Be The "Fun Uncle"

In a May 2016 People cover story, he said, according to the Daily Mail:

6. When He Shared His Best Royal Advice For His Niece And Nephew

Shortly after Princess Charlotte was born, Prince Harry shared his advice for her and Prince George. He said in a TV interview, according to the Mirror:

As an uncle, you know, I would say enjoy the role, because at first it’s just pressure, pressure, pressure ... Just enjoy it and make the most of it. If you’re going to be doing it and you’re having an effect on so many people then, if you smile, they’re smiling — and what’s the point of doing such a unique job without enjoying it?

7. When He & Meghan Honored Their Nieces & Nephews At The Royal Wedding

At their royal wedding, Harry and Meghan opted for a bridal party of Prince George, Princess Charlotte, and other children they are close with. Unfortunately, Prince Louis was a little too young to make the wedding — but when Harry and Meghan do start a family of their own, you can count on their baby and Prince Louis being thick as thieves.