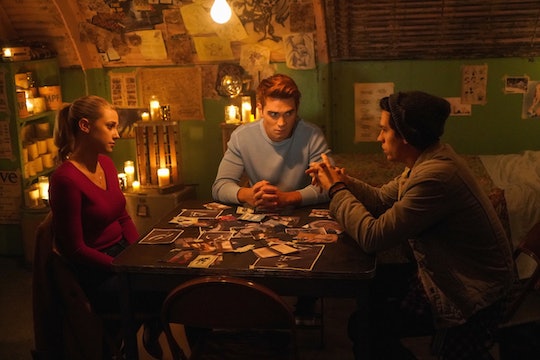 Literally Anything Is Possible On 'Riverdale'

Things move fast on Riverdale, and before you know it, one mystery turns into another. Tall Boy’s Gargoyle King reveal was a fakeout, because the real murderer is still on the loose, Betty’s house was purchased by a mysterious buyer, and Edgar Evernever’s motives to move into town are still suspicious. Amidst all the intrigue, fans have come up some of the weirdest Riverdale theories you could think of, but they could actually be true.

Just when you thought the mystery of the Gargoyle King was solved — albeit in a pretty anticlimactic way — Jughead comes across Kurtz, the leader of the Gargoyle Gang who seems way too obsessed with Gryphons and Gargoyles. Despite coming into the fold of the Serpents (thanks to Gladys), Kurtz is doing his own thing, living out his G&G quests without batting an eye. He’s proving to be a problem for Jughead, and it looks like the Serpents have bitten off more Kurtz than they can chew.

And just when you thought you knew who all the big players in town are — Hiram Lodge, Edgar Evernever, and Penelope Blossom — an unknown out-of-town buyer purchases Betty’s house. It’s safe to say the mysterious buyer will eventually play a part in the town’s drama, and that drama could literally be anything.

Meanwhile, Archie finds out the kid he took under his wing, Ricky, is far more dangerous (and smart) than he thought, and Veronica is still dealing with her dad’s interference in La Bonne Nuit. With so many moving parts to piece together, fans are theorizing their own wild ideas about what will happen on Riverdale.