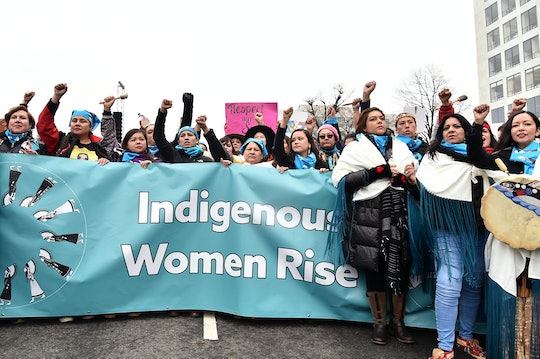 7 Organizations That Support Women Of Color

On Saturday, millions of people participated in the Women's March on Washington and sister marches around the country and the world. Many of them were women. Many of them were women of color. Several marched with women's organizations, and it's more important now than ever to be aware of and to promote organizations that support women of color, because true feminism is inclusive.

But some people of color felt marginalized at the marches, despite attempts at the highest levels of leadership to be inclusive. There are people who claim that women who rightfully bring up that intersectionality needs to be a integral part of feminism and movements around women's rights are being "divisive." These people are wrong.

As one of the march's national co-chairs, Linda Sarsour, said at the Washington march, “Want to know if you’re going the right way? Follow women of color.”

As quoted in the above Mic.com piece, feminist scholar Audre Lorde once said in her speech "The Uses of Anger," given at a 1981 National Women's Studies Association Conference, that

When women of color speak out of the anger that laces so many of our contacts with white women, we are often told that we are 'creating a mood of hopelessness,' 'preventing white women from getting past guilt,' or 'standing in the way of trusting communication and action.

In order to commit to true feminism, white women in particular, and all women who support women's rights, need to commit to being intersectional, and to allowing women of color to be centered in the fight for equality.

Just as a start, here are some organizations that specifically support women of color.

The National Black Women’s Justice Institute (NBWJI) is an organization that focuses on reducing racial and gender disparities in the justice systems that affect black women, girls, and their families.

According to the organization's "About Us" page:

NBWJI works independently and in collaboration with a number of domestic universities, organizations, and consultants to conduct its work on behalf of Black women and girls in the U.S. who are impacted by criminalization and the criminal justice system directly and indirectly because of their race and gender. NBWJI also works in collaboration with organizations that elevate equity discourses among all women and girls.

UltraViolet uses its online platform and email newsletters to keep its supporters informed on actions to take and abreast of concerns that could impact women, and it has a particular focus on women of color. According to its site:

UltraViolet is a powerful and rapidly growing community of people from all walks of life mobilized to fight sexism and expand women’s rights, from politics and government to media and pop culture. UltraViolet works on a range of issues including health care, economic security, violence, reproductive rights, racial justice, and immigration by putting the voices of all women, especially women of color and LGBTQ women, front and center.

It's another good organization to follow that centers women of color, and it's fairly well-known. They were also involved in the Women's March on Washington, as evidenced by this tweet:

Feminism also needs to be inclusive of transgender individuals and gender non-conforming people. TWOCC is an advocacy organization, run by and for trans women of color. Its mission is as follows:

To uplift the narratives, lived experiences and leadership of trans and gender non-conforming people of color, our families and comrades as we build towards collective liberation for all oppressed people.

Its goal is to "to create safe spaces for transgender and gender-non-conforming people to: practice self-care, educate, empower, celebrate community, and strategize," with each of those categories including a breakdown on its website.

SisterSong is a network of local, regional and national grassroots organizations and individuals who support the goal of improving the lives of women of color in the United States through advocating for reproductive justice. According to its website:

SisterSong Women of Color Reproductive Justice Collective was formed in 1997 by 16 organizations of women of color from four mini-communities (Native American, African American, Latina, and Asian American) who recognized that we have the right and responsibility to represent ourselves and our communities, and the equally compelling need to advance the perspectives and needs of women of color.

SisterSong specifically focuses its work on the reproductive justice needs of women of color, and notably includes advocacy for Native American women.

As stated on its website, part of the NIWRC's mission includes "key principles to ending gender-based violence." The site lists these as:

The site also lists national partnerships, as well as other resources to refer to.

The Women's March on Washington was led in part by national co-chair Linda Sarsour, the Executive Director of the Arab American Association of New York. She is described on its website as, "a Palestinian Muslim American and a self-proclaimed 'pure New Yorker, born and raised in Brooklyn!,'" and also as the "co-founder of the first Muslim online organizing platform, MPOWER Change."

Our mission is to support and empower the Arab Immigrant and Arab American community by providing services to help them adjust to their new home and become active members of society. Our aim is for families to achieve the ultimate goals of independence, productivity and stability.

Finally, the National Organization for Women, or NOW, states that, "since our founding in 1966, NOW’s purpose is to take action through intersectional grassroots activism to promote feminist ideals, lead societal change, eliminate discrimination, and achieve and protect the equal rights of all women and girls in all aspects of social, political, and economic life."

NOW was founded in 1966 by 28 women at the Third National Conference of Commissions on the Status of Women in June of that year, and founders included Betty Friedan, Shirley Chisholm, and Pauli Murray. Its "Issues" page includes a focus on Racial Justice, and states, "NOW continues to fight for equal opportunities for women of color in all areas including employment, education & health care."

NOW also participated in the March, and tweeted, "An incredible time at the #WomensMarch in DC!"

Those are just a few organizations that specifically focus on the issues of women of color, or that have a more broad range of women's rights concerns but that make sure to center women of color in the narrative. There are a lot more out there — in fact, the Women's March on Washington website partnership page lists many organizations that partnered with it on the marches. There is no shortage of organizations that will need support in the next four years.