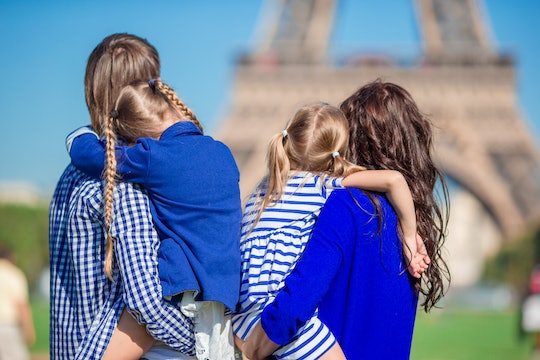 Like many people in my generation, I've more than a bit enamored with all things French. J'adore everything from French food and wine, to art, culture, and the French countryside. In my travels abroad, I've noticed that while my kids sometimes make me want to book a flight to Paris, generally speaking, French kids seem much more like Madeline and less like Caillou. So, I started wondering if there were things French moms could teach me to make my life, as a mom, easier. I've discovered that in many respects, they seem to be onto something.

I'm not alone in my awe. American mom Pamela Druckerman was so impressed by French mothers, she wrote a book, Bringing Up Bébé, about it (which I, of course, read). French moms seem more self-confident, self-assured, and well-rested than their American counter-parts. This might be bi-product of their decision to sleep train their babies, let them fuss a bit before picking them up, and literally believe that "mother knows best." Their kids don't snack all day, so at meal times they actually eat what they are served. It all seems so magical.

Now, I am not saying that I agree with every single French parenting tactic. They do have a reputation for being a tad bit more authoritarian than I am, especially when it comes to things like not validating their kids' emotions and telling them, no (or "non"). But I definitely think French moms can show me a thing or two. As American reporter Jenny Anderson writes for Quartz Media, it might have something to do with the country of France being far more supportive of moms than the U.S. when it comes to creating family-friendly policies around paid parental leave, affordable child care, and health care. So, maybe it's part that they live in France, and part that they are able to make parenting choices relatively free from judgment. Or maybe it's the wine. Either way, here's what us United States moms could learn from our French counterparts:

More Like This
10 Parenting Lessons From Abbott Elementary That You'll Want To Write Down
Experts Explain Whether It’s Safe For Your Baby To Sleep On Your Chest
Zaya Wade Is Rocking New Long Hair & As Gabrielle Union Put It, She's A "Vision"
Introducing My Boyfriend To My Kid