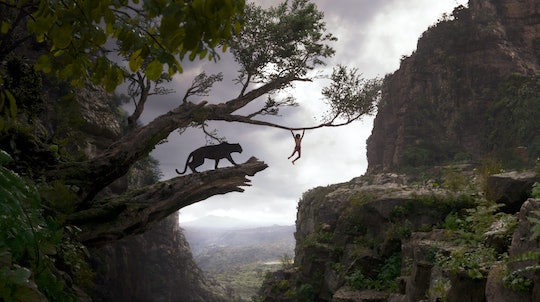 Director Jon Favreau’s live-action adaptation of Disney’s The Jungle Book opened this past weekend and critics are already raving about the film’s so-real-it’s-scary computer animation and the spectacular visual effects. I will freely admit that I was still on a high from watching — even some 48 hours after I took my family to see it. But while I loved the original animated version for the songs and the free-to-be-yourself message, this time around, I watched Mowgli’s story through the eyes of a parent and came away with a different connection to the Rudyard Kipling classic. The Jungle Book offers some incredible parenting lessons, told through powerful moments with the animal friends and surrogate family surrounding Mowgli (played by Neel Sethi): Bagheera (Ben Kingsley), Raksha (Lupita Nyong’o), Akela (Giancarlo Esposito), and Baloo (Bill Murray).

I cried no fewer than three times while watching The Jungle Book this past weekend, and not because of that surprising death scene (those who’ve watched already know the one I mean) but because of the film’s amazing storytelling. I grew up with Mowgli’s story and thought that I knew it well. But this time, I found myself relating to the parent figures in Mowgli’s life as they balanced their instincts to protect him from every harm against the reality that he’d have to grow in order to survive.

It’s a tough line for any parent to walk. And, without spoiling the movie for anyone, the adults in Mowgli’s life did seven things to help him find his own way, lessons that any parent could use to help their little one inch along the path toward independence.

1. They Grow At Their Own Pace

Early in the movie, Bagheera explained to the audience that while Mowgli’s wolf-brothers would grow to adulthood in just a few seasons, the human baby took far longer to come of age. Basically, kids grow and learn at their own pace, so hurrying them is isn’t helpful. No matter what the milestone or life lesson is, they'll get there when they get there.

2. Sometimes You Have To "Use Your Tricks"

Again, no spoilers here, so I’ll just say that Mowgli was an incredibly clever kid. He had a talent for ignoring the rules in favor of solutions that just felt natural to him — what Bagheera called his “tricks.” That’s a talent that I want to remember as a parent; sometimes it’s better to come up with my own solutions than try to follow what the so-called experts have to say.

3. Do What Works For The Kid In Front Of You

4. And Teach Them To Embrace Their Strengths

Part of parenting is teaching our kids that when there’s a problem, they already have the tools to address it. And their unique way of thinking may lead to something no one else has ever seen. That’s a lesson that became important in Mowgli’s journey — just as I’m sure it will for my kids one day.

5. Let Them Find Their Tribe

This one is pretty major: everyone has to find his or her “people.” I’ve given my kid some people to count on, just as Bagheera did for Mowgli. But, as my daughter grows, she may choose her own brand new mix. In the end, her tribe may look exactly like what I envisioned for her or like nothing I’d ever thought to imagine. But if they reflect who she really is, I think I’ll be happy.

6. Adversity Can Be Terrifying, But It’s The Whole Point

It’s probably safe to say that, had Mowgli been able to stay safely tucked away, all of his parents — Bagheera, Rashka, Akela, and Baloo — would have slept a bit easier. But he wouldn’t have grown at all. Kids get stronger by facing challenges and testing themselves, not by having adults clearing every pebble out of their way.

7. And Remember That No One Can Do It All

Sure, Bagheera loved Mowgli and was willing to raise him. But for Mowgli to thrive, it took a village — from Raksha, Akela, and the wolfpack, to a friendly bear named Baloo — to give him the love, lessons, and protection he needed along his journey. Parenting can feel like a lonely job, but I don’t think we’re really meant to do it alone. Each of us needs a support system of people willing to love and protect our kids as fiercely as we would. Parents need “people,” too.

Sure, I first learned Mowgli’s coming-of-age story when I was around 7 years old. But Favreau made it easy to fall in love with The Jungle Book all over again; the stunning visuals, engaging graphics, and amazing acting came together to make true magic on screen. And, as an adult — as a parent — I experienced the tale differently in Favreau’s retelling. This time, as I watched along with my preschool daughter and her friend, I couldn’t help but connect with the adoptive parents in Mowgli’s life and the lessons they had to offer. So, in a very real way, it was like we were all seeing the story for the first time. That’s impressive for a story that’s been around more than 100 years.