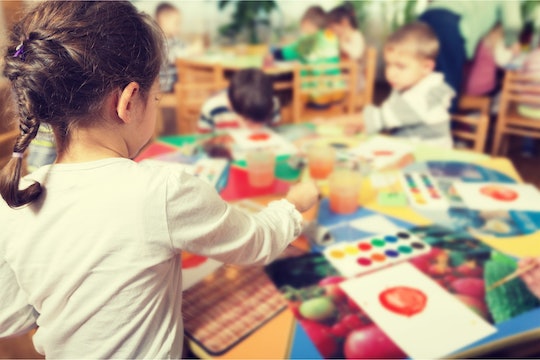 Why I Didn't Put Your Artwork On My Fridge, Kid

My children are not the next Da Vinci or Van Gogh. Sounds harsh, but it's true. My 10-year-old daughter and 5-year old son bring home a lot of crap they've made in school and some of it's, well, not great. I get that my kids are little and it's "cute," or whatever, but I have some perfectly good reasons I didn't put their artwork on my fridge, and I can't apologize for them. Though, I'll probably have a prepared speech full of excuses and lies to make my children feel better about it. #motherhood

When my oldest was in her first year of pre-kindergarten, she used to bring home the most adorably awful drawings and crafts. Back then, it really was cute because we'd never had the experience of a child going to school before. I kept everything she made and displayed it all proudly on every last bit of spare space on the refrigerator and walls. I even framed some of her "pieces," you guys. I wanted to encourage her creativity and show her how proud we were because when it's your kid, it's just what you do.

Five years later (to the exact day), enter my son and his first year of pre-kindergarten. To say we were less enthused is an understatement. Sure, the first couple of weeks I was thrilled to see him make any progress. He went from never holding a pencil to writing his first and last name faster than my daughter had, and his little smiley faces were, and continue to be, blobs of weirdness I quite enjoy. But as the days and weeks drag on into his 2nd year of pre-k, I'm sort of, mostly, totally over it. Every day it's a new thing, none much better than the ones prior. It's not they aren't spectacular, it's just that they're all kind of the same and none if it is viral-worthy. However, it's my duty to display whatever they bring home, right? Ugh. Lately, I just don't want to unless it "wows" me. Is that so wrong (don't answer that)? Also, remind me to delete this once my kids are big enough to see it (just in case: mommy loves you!).