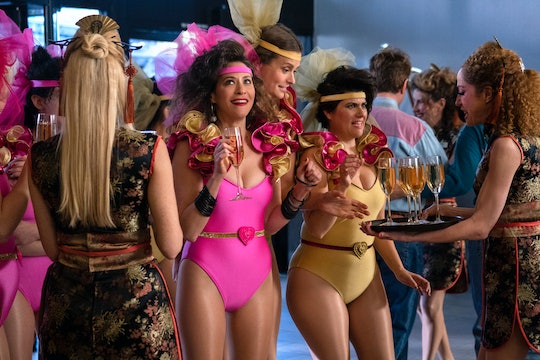 So What Happens In Vegas On 'GLOW' Season 3?

The Gorgeous Ladies of Wrestling are finally returning to Netflix this month after a slightly delayed release date, and predictions for GLOW Season 3 are already flying. Early reviews have been teasing a "special moment" late in the season between the now twice Emmy nominated Betty Gilpin and Season 3 guest star Geena Davis. But what could that moment be? And what else can fans expect this season?

For starters, it's already been revealed that the show shifts locations from Los Angeles to Las Vegas for Season 3. After Season 2's fight to get a cable TV slot, only for GLOW's public access station exec to point out that he has ownership rights in perpetuity, the gang decides to ditch TV in favor of a live wrestling show. A strip club owner offers them a venue in the (fictional) Fan-Tan Hotel & Casino, run by entertainment director Sandy Devereaux St. Clair (Davis). Sandy is a former Vegas showgirl herself, so she understands the uncomfortable pigeonholing the ladies must endure in order to play their "types." But her vibe in the trailer also screams "wise elder with a secret," so I suspect there's something more brewing beneath the surface there. Here are some other possibilities for Season 3.