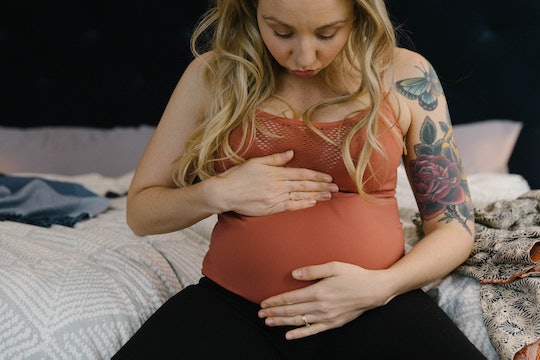 If you're anything like me, pregnancy is full of mysterious, annoying, and often disconcerting aches, cramps, twinges, and pains. It's enough to make even the calmest mom-to-be freak out. My weirdest pregnancy symptom, however, was definitely the sharp, electricity-like pain shooting out of my vagina during my third trimester. My midwife told me I had "lightning crotch" and that it's generally not something to worry about. Thankfully, she also told me there are ways to treat pregnancy lightning crotch, too.

Unfortunately, the best treatment for your pregnancy lightning crotch entirely depends on what's causing it, so you might be in for a little bit of trial and error before you find the right remedy. As Chaunie Brusie, RN, BSN, author, labor, and delivery nurse, explains via Healthline, lightning-like pains in your crotch can be caused by the pressure of your baby's head on your cervix and as they move into position for birth. According to OB-GYN Peter Ahlering, another cause of lightning crotch might actually be varicose veins on your labia or inside your vagina, which can be treated and/or will go away after delivery. What to Expect explains that it can also be a sign that your cervix is dilating to make way for your baby, so while painful and annoying, if this is the cause at least you know the end of your pregnancy pain is in sight.

As always, the American Pregnancy Association (APA) recommends that you call your midwife or doctor right away if you have severe and/or long-lasting pregnancy pain, especially if you also have other symptoms or it doesn't get better after certain treatments. But if you want to try and treat your lightning crotch at home, here's a few ways to do it:

More Like This
Guys, We Need To Talk About Pregnancy Farts
Is Raspberry Leaf Tea Safe To Drink During Pregnancy?
Is Vape Smoke Bad For Pregnancy? Experts Explain The Risks
22 Valentine's Day Pregnancy Announcement Ideas Sweeter Than Candy
What Parents Are Talking About — Delivered Straight To Your Inbox