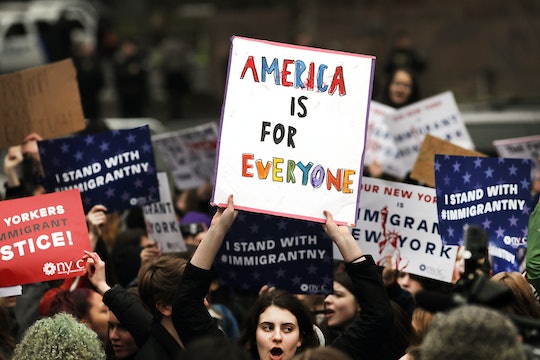 7 Presidents Day Protests You Can Go To On Monday

This year, President’s Day isn’t just an extra day off which would typically be spent sleeping in or snagging some amazing shopping deals online. No, this year will be very different. Thousands of people across the nation have vowed to spend the patriotic holiday protesting President Donald Trump and his policies at one of the many rallies planned on Monday, Feb. 20. Instead of going to work and lying in bed, binge-watching a few seasons of The Office, scores of concerned Americans are choosing to be proactive when they participate in one of the many Presidents Day protests happening on Monday.

Thousands of rally-goers are expected to head to the streets to show their resistance to Trump’s administration, whether it be its harsh policies on immigration and the refugee crisis or many of his Cabinet members' archaic views on reproductive rights and women's equality. Needless to say, Americans have plenty of reasons to voice their concerns about the president and all that he stands for.

Protests nationwide have happening since Friday and with the actual federal holiday on Monday, the day’s added significance is expected to attract even more people to one of the many Not My President's Day rallies happening in dozens of cities.

If Trump is not necessarily what you imagined your president to be and you want to spend your day off a little differently this year, consider going to one of these seven events happening in multiple cities across the nation on Monday, Feb. 20:

From 2 p.m. to 4 p.m., more than 500 people plan on heading to Dupont Circle in the capital to participate in a peaceful demonstration. According to the rally's Facebook page:

We are calling on members of the DC community to come together in solidarity against the hateful rhetoric and actions of the current administration. Let us, the constituents of this President, stand in support of our brothers and sisters of different nationalities, backgrounds, races, religions, ability, and sexual identity. Let us show our DC community members that no one is alone and we support and stand in solidarity with our neighbors.

If you're in New York City, head to 61st Street and Central Park West from 12 p.m. to 4 p.m. to join to 12,000 other people who plan on attending. According to the rally's Facebook page:

Donald Trump stands against the progress we have worked hard to enact. He does not represent our interests. He was voted in by a minority of the American public but governs as if there's no resistance. But there is -- and on February 20th, we will honor previous presidents by exercising our constitutional right to assemble and peacefully protest everything Donald Trump stands for.

More than 3,000 people are planning on going to this rally, which will take place downtown at city hall on Spring Street from 12 p.m. to 4 p.m. (local time). According to the rally's Facebook page:

Donald Trump is literally our President, but figuratively, he has attacked every value Californians embody and does not represent our interests. We will be staging a rally downtown at City Hall to protest the anti-Californian policies of the current White House.

To join the 3,500 people attending the rally in Chicago, head to the northeast corner of Wabash Street and Wacker Drive, which is across from the Trump Tower. According to the rally's Facebook page:

In solidarity and unity with partner demonstrations throughout this country, we are proud to stage in Chicago – a Sanctuary City – a rally to protest the policies and actions of the current White House. While Donald Trump is technically our President, we protest fiercely on this important day – in honor of the Presidents who have come before him – his ability or intention to represent any of us in any real capacity.

From 4 p.m. to 7 p.m. (local time), more than 1,200 people will head to the JC Nichols Memorial Fountain. According to the event's Facebook page:

Kansas City comes together to demand an investigation into the constitutional conflicts, ethics violations and mental instability of the current President of The United States.

Nearly 200 people have marked their attendance for this rally, which will take place at the Colorado State Capitol from 9 a.m. to 5 p.m. (local time).

From 12 p.m. to 3 p.m. (local time), join more than 200 other people at the south steps outside the Texas State Capitol. According to the rally's Facebook page:

Donald Trump does not represent our values, and therefore we refuse to honor him on President's Day. Instead, we will honor the principles of democracy for which our previous Presidents believed in valiantly: the right to assemble, and the right to fight for those of our brothers and sisters who have not yet been included in the word "equal."

In trying times like these, coming together and standing in solidarity with people who feel the same way you do can make these days a bit easier. So if Trump doesn't represent your values and beliefs, it might not be a bad idea to head to one of these rallies — you certainly won't be the only one.