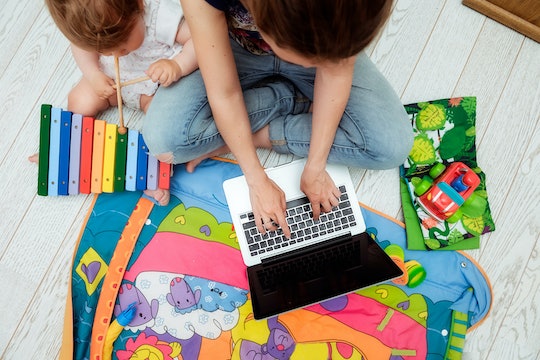 President Donald Trump officially signed the GOP's tax bill into law, and it's the most significant overhaul of the United States' tax system Americans have witnessed in decades. Despite rumors that Trump would wait to sign anything until early 2018, he gave the republicans a gift by doing it quickly before leaving for his Florida estate, Mar-a-Lago, for the holidays. With this new bill in play, parents will want to know if they still meet the qualifications for the child tax credit under the GOP's new tax bill.

The current child tax credit is $1,000 and only partially refundable, so tax filers can only claim refunds on a percentage of what they make over $3,000, according to Efile.com. The Tax Policy Center notes that families may receive some or all of the balance of this credit as a refund if it exceeds the amount of taxes owed that year. In 2016, it was expected that 70 percent of families with children received an average credit of $1,060, the center reported.

Now the GOP's tax overhaul will reportedly allow parents to receive twice as large of a tax credit for each of their children. The tax credit doubles from $1,000 to $2,000 per child under the age of 17 years old. Additionally, it allows parents to receive up to $1,400 in refunds -- but only if said credit is actually larger than their federal income tax liability, according to CNN. Sen. Marco Rubio threatened to vote against the bill unless it included a more generous child tax credit, Business Insider reported, which is reportedly why the refundable aspect of the credit was increased from $1,100 to $1,400.

The final bill is 500 pages and involves so many parts of the tax code, and how this part of the tax bill affects you will depend on how many children you have, how much you pay in mortgage interest and state/local taxes, how much you earn and more, according to Investopedia.

In order to claim the child tax credit, for example, you have to first determine if your child is eligible — and some of that changes with this new bill. There are still the same seven qualifying tests as last year to consider: age, relationship, support, dependent status, citizenship, length of residency and family income, according to TurboTax. That said, there are some changes to these tests.

First, though, here's a quick look at the seven qualifications you need to fall under to be able to claim the child tax credit, according to the TurboTax:

The major differences parents should note are as follows:

The GOP's bill also dumps deductions for personal exemptions, according to CNN, which could offset the benefit of the child tax credit for some families. In other words, filers at certain income levels have been able to deduct $4,050 for themselves, their spouses and for each dependent — so all of that money (plus the current standard deduction of $6,350) was protected from federal taxation. Now, however, the bill will double the standard deduction to $24,000, which sounds all well and good, but it'll wipe out the deduction for personal exemptions so larger families will get less of a break, CNN added in its report.

In other words, despite what's been touted as "massive tax cuts," the bill doesn't seem so great for many parents. Left-leaning D.C.-based think tank, The Center on Budget and Policy Priorities, calculated that parents of 10 million children would qualify for an additional refund of just $75 or less under the committee's deal.

You might want to be more vigilant about keeping all of your receipts in 2018. While a lot of miscellaneous deductions have also been dropped, maybe there's still hope to make up for some of your losses.