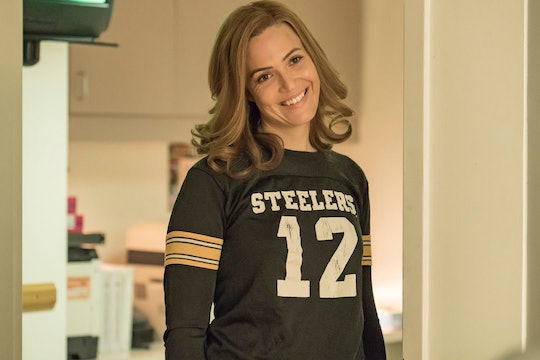 Super Bowl Sunday may have been a victory for Eagles fans everywhere, but it was an entirely different story for This Is Us fans, who suffered a devastating defeat after witnessing the death of Jack Pearson, beloved father, husband, and friend to all. The cause of his death has been the central focus of the series for the better part of two seasons, but it isn't the only mystery the show has delivered. In fact, there are still questions This Is Us still needs to answer that have absolutely nothing to do with Jack's death.

Don't get me wrong, Jack's death has certainly been at the forefront of my mind, especially over these past few weeks. But now that that particular mystery is solved, I'm eager to shift the focus back on his life rather than his death. This family is so much more than just one specific event and I'm eager to dive even further into their lives. Though, for the sake of my own emotions, I'm hoping that will include some happy memories every so often.

Regardless, this show may qualify as a drama, but it's also filled with some seriously unexpected twists that sometimes leave me on the edge of my seat. There are things I need to know, and now that the revelation of Jack's death is in our rearview mirror, I'm eager to get some of these other questions answered. For example...

What Happened To Jack's Brother?

The big reveal that Jack once had a brother has been put on the back-burner over the past couple of months, but I'm extremely curious as to what happened to this person who was so important to Jack once upon a time. Do Rebecca and the kids know about him? What exactly happened? I would love for the show to fill in some more blanks to this particular storyline.

Why Doesn't Jack Talk About His Time In Vietnam?

For a guy who is so great at communicating his feelings to his family, he sure has been tight-lipped about his time in the war. Why is that? What happened that makes him seem so unable to talk about it? Could this have something to do with his brother?

What Brought Deja Back?

At the end of Sunday's episode, we saw her return to Randall and Beth's house. From the look of things, this didn't seem like just a friendly visit. Is she in trouble? Did she get into a fight with her mom? Could this signify that she's going to move back in with them? I need answers, people!

Where Is Beth In The Flash Forward?

Call me pessimistic, but this show isn't exactly known for holding back on emotional punches. So just like I was instantly nervous when the present-day Rebecca showed up at Randall's house without Jack by her side, I'm going to be equally worried over the fact that Future Beth isn't with Future Randall. Has something happened to her or is this just like a special thing that Randall and Tess do every week? I'm hoping it's the latter.

How Often Can Viewers Expect To See More Flash Forwards?

We saw an older version of Tess and Randall. Will this become a regular thing now, similiar to how flashbacks are incorporated into almost every episode? Series creator Dan Fogelman teased to Deadline during a recent interview that "the future can play a big part in seasons to come," though he didn't specify how often it would happen or who fans would see showcased in them. I'm certainly not opposed to the idea.

Will Kate & Toby Try To Get Pregnant Again Soon?

Kate had mentioned a few months ago that she wasn't quite ready yet to start trying immediately after her miscarriage, which is completely understandable. But she did make it sound like she did want to try to get pregnant again in the future. Will we see that storyline progress before Season 2 comes to a close?

Where Does The Pearson Family End Up Living?

Now that their house has burned down, where will Rebecca, Kevin, Kate, and Randall end up? Do they move in with Rebecca's parents temporarily? Do they stay with Miguel? Does this totally sideline their plans for college? I've been so focused about Jack's death, I never really thought about the immediate aftermath and how it impacted the lives of those he left behind.

I'm sure at least some of these questions will get answered relatively soon while others probably won't. But that just further proves that, even though one particular mystery about this family has been solved, there's still so much to learn about them. And for that, I am grateful.