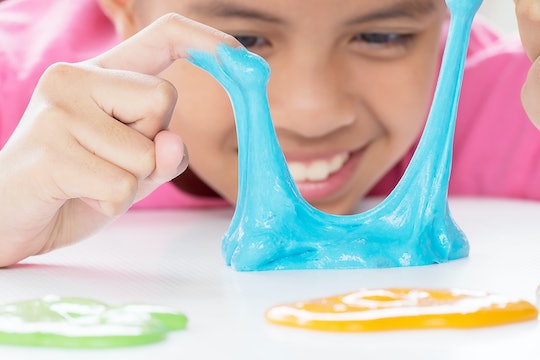 Slime is all the rage with kids right now (as if you didn't know, right?). The goo has come a long way in the past few years, with options that sparkle and glow. There is an abundance of recipes circulating the web right now, but because time and ease are important factors in the busy lives of parents, it's good to know which recipes are a little faster to make. This is especially true if you have little ones with limited attention spans. Thankfully, there are quick slime recipes online to help you do your DIY thing and be done.

If for some reason you don't know what slime is, here's a quick crash course. Rising in popularity during the '90s thanks to Nickelodeon slime or Gak, slime is a gooey, stretchy, moldable substance that kids play with (I still haven't figured out the exact purpose other than it's just feels and looks cool). Because blogs and YouTube weren't "a thing" in the '90s, most people just bought their slime at the store.

Thanks to modern technology, however, you can easily find a number of slime recipes that are super easy to make as well as super safe. (The safety factor is more important than ever after an 11-year-old-girl in Massachusetts suffered from third degree burns from Borax, a common slime ingredient, according to CBS News.)

Here are seven safe, quick slime recipes for you and your kids to try out.