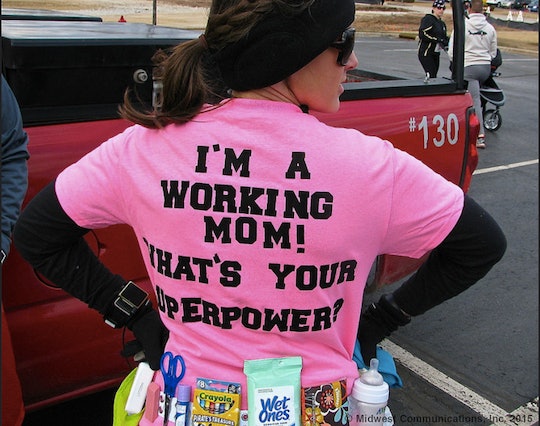 Today, America got one step closer to eroding the gender wage gap. On Friday President Obama leveraged his executive power to make pay discrimination transparent in companies with over 100 people, The New York Times reported, making it easier for people to fight for equal pay, regardless of gender. Transparency in salaries will make it easier for women to fight for what they're owed and harder for companies to hide it when they pay men and women different amounts for the same work. This is especially good news for women with kids; moms care about equal pay not only because those who work outside the home need every penny they earn but also because it sets the right example for kids. In his remarks, Obama asked, "What kind of example does paying women less set for our sons and daughters?"

Pay discrimination is wrong no matter how you slice it. Although money is only one way to measure a person's worth, it's abominable that the federal government is willing to turn a blind eye to wage inequality. It's dehumanizing when companies pay their employees less because of gender or race. But it's often the reality. According to a report presented by the U.S. Current Population Survey and the National Committee on Pay Equity as well as the Bureau of Labor Statistics, not only is the gender wage gap real, race can play a role in determining average salaries paid out by corporate America.

If you're a mother, the gender pay gap can have an even bigger impact on your life. The Pew Research Center reported that as of 2015, because of the gendered pay gap, more mothers than fathers take time off to take care of their kids. When you do the math, that makes sense, right? If you're the spouse being paid less, it makes more sense for you to quit. According to the same Pew Research Center survey, about 40 percent of mothers reported taking a significant amount of time off from work. 39 percent of mothers reduced their work hours to care for a child or other family member. Nearly 27 percent reported quitting work in order to stay at home and raise a family. In comparison, only 24 percent of fathers reported taking off time from work to take care of a child or family member.

As the country progresses towards equal pay, moms in particular should raise a glass. Here are 7 reasons why:

Moms Cash In On Their Value

No matter how awesome your family is, there will always be a day when you feel unappreciated by your clan. As the country moves to end pay discrimination, working moms will know their worth when they look at their paycheck. And that makes those hard days sucking it up for your beloved fam a little easier. Go ahead and treat yourself to a pedicure and or whatever it is that helps you feel as good as you deserve to feel.

Just as women suffer from having to live up to unrealistic gendered expectations, so do men. A 2014 article in The Guardian reported that men suffer depression from "archaic male stereotypes." The pressure to "man up" and financially support the family is a terrible burden for fathers. Equal pay will help level the playing fields in the domestic economy.

Moms Can Pursue Their Dream Jobs

When I was growing up, my mom decided to go back to school and earn an advanced degree to pursue her dream job as a teacher. It was hard for her to juggle her schedule and pay out so much of her salary for childcare, but she had to be self-fulfilled in order to be happy. Equal pay makes work that much more satisfying and childcare costs a little less stressful.

It Shows Change Is Possible

Some big progressive changes have happened under Obama (see the sea change in attitudes toward LGBT Americans). Equal pay is a major one.

Dads Can Spend More Time With Their Kids

Expect equal pay to trickle down to changes in the domestic economy. When women earn as much as men, it's not assumed that women need to pick up the slack at home. Working moms out there, keep your fingers crossed for more sharing of The Second Shift.

The old adage more money means more problems was clearly thought up by someone rich.

So whether you work outside of the home, within it, or both, the fight to end pay discrimination is a cause moms should care about. And today, a little progress was made in the right direction.