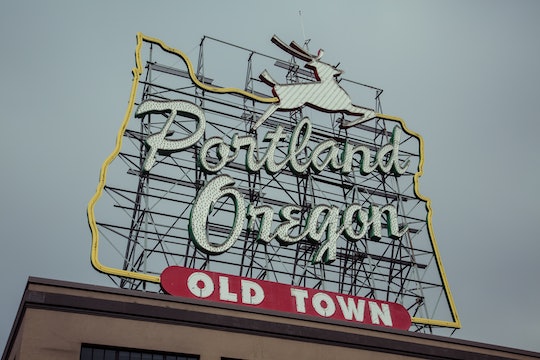 7 Reasons Portland Rocks For Families, So You Should Start Planning Your Move Now

Portland, Oregon is a city near and dear to my family's hearts. My husband grew up here, born and raised, and didn't leave until he was 24 years old. And then when he did leave, it was only to go two hours away. I visited often during my childhood years (my parents may have really loved tax-free shopping) and then I moved to the City of Roses for college. In my mind, there was no other city to consider for my first big move away from home.

Portland was fantastic for college life, but truly, it was even better once I got married and started a family. My daughter was born downtown, and to this day she loves claiming Portland as her city, her birth place.

If you were to poll Portland families, they could probably share 100 reasons why their city rocks for family life. But I'll highlight my favorite seven. Once a Portland girl, always a Portland girl! (And now it's even better because we get to share it with our kids!)

It's Got A Little Of This, And A Lot Of That

Downtown is full and fabulous. The restaurant scene is out of this world and there are constantly shows and events on the city schedule. But, the beauty of Portland is that you can be close to the city without trying to stuff your family into a high-rise apartment.

Portland is full of smaller, accessible districts and neighborhoods that give you the backyard your family needs within minutes of the downtown buzz.

It's The Beach Like You've Never Seen It Before

If you haven't been to the Oregon Coast, get it on your bucket list! It's just two hours from Portland and is a favorite day trip for Portland families. There's no white sand and it's often windy, but it's majestic and beautiful. Sometimes, even downright breathtaking.

There's Stuff To Do Outside — And It's Free

Our family favorite is the market — either Saturday Market or the PSU Farmer's Market. But that is just the beginning. There are countless downtown parades throughout the year, river activities, and the Gorge is just a short drive away. Kid-friendly hikes abound and the city playgrounds are top notch!

The Museum Is Actually Fun For Kids And Adults

OMSI stands for the Oregon Museum of Science & Industry, and I've never found a more family-friendly museum focused on learning. With staple attractions and new ones on rotation all the time, a membership to OMSI is pretty much a given for Portland families. It also doesn't hurt that parents can have a good time scoping out the sights, too.

It seems like every where you turn in Portland, there's a food truck. And not just any kind of truck. The kind where there are big lines because the food is just that amazing. It's kind of impossible to go wrong when it comes to food in Portland. (If we're calling out favorites, stop by The Grilled Cheese Grill or Los Gorditos!) My elementary school friend even has a truck, Guero. The food in Portland will literally make your mouth water. Oh, and don't even get me started on the heavenly coffee.

Most big cities have a strong history, but there is something extra special about the Wild West and how it was founded. Portland is the largest city in the 33 state, and as a port city (hence its name) it seems like every corner boasts a historical story. I honestly didn't know a ton outside of the quintessential Oregon Trail, but the Portland Walking Tour opened my eyes to so much more.

You Want Options? Well, You've Got A Ton Of 'Em

Does your child have allergies? Need lots of gluten-free choices? Want a Montessori school or a public one that has its own cafeteria garden? In search of a water birth center or a pediatric naturopath? Portland is the place to be. Alternative options are readily available and encouraged. Basically, every Portland family has a little hippie in them and it's prevalent in the businesses you see popping up all over the city.