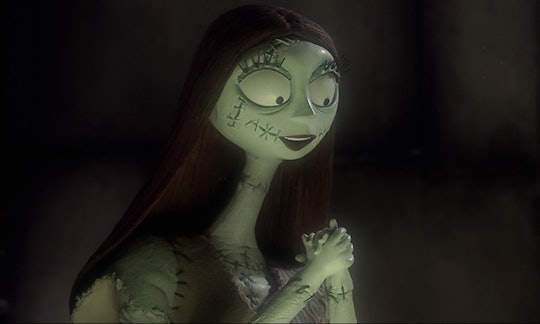 The rule in my house about Christmas movies is that they are strictly forbidden until the day after Thanksgiving. Look, I love Christmas, but I cannot handle the idea of Yuletide cheer until I am allowed to thoroughly enjoy my fall. There is, however, one exception to this rule: The Nightmare Before Christmas. I love this movie with a passion that swells inside of me like a sponge in water. If it happens to be on TV, I'm watching it. If it's fall, I'm listening to the soundtrack. When Disney switches its Haunted Mansion ride to have Nightmare Before Christmas characters from October to January, I prefer it to the original version of the ride, which (in my personal experience) is a sort of controversial opinion. I have mentally created an amazing Broadway production of this movie over the course of about 15 years. (If they can do it with The Lion King, they can do it with this! It would be so cool!) That's how much I love The Nightmare Before Christmas. This past October, I introduced my kids to the movie and, of course, they loved it. So I dusted off an old Sally doll for them to play with. (Yes, it had been mine and yes, I was in high school when I got it. What's it to you?) But as I watched my daughter delightedly bat around the little rag doll, I came to a realization: Sally is one of the worst heroines ever.

For goth kids (and former goth kids, like me), Jack and Sally are held up as this ideal romantic couple but, really, let's break it down for a second here: Jack is visionary in his field; a king. He sings songs of longing to express himself in more exciting ways. Sally sings songs about how she's not good enough for this misguided, short-sighted guy who has shown very little interest in her other than knowing her name and calling her clever once. Jack's motivations throughout the film are all to do with creativity, discovery, ambition, and accomplishment — Sally's motivations are entirely based on Jack. At the end of the movie, Sally and Jack determine they are "simply meant to be" and kiss in one of the coolest and most iconic kisses in all of cinema. But the whole thing plays out like a narcissist's wet dream, the story of a man who, in spite of a great folly, gets to retain his status as compelling and beloved genius, winding up with the quiet mousy girl who underplays her own ingenuity to worship him. Looking at it from Sally's point of view, it's basically vicarious wish fulfillment for every quiet girl who ever loved the lead singer in a band.

Normally, I would dismiss all this as typical, male-centric movie writing, and to some degree, that is there. But this is slightly different. Sally isn't a manic pixie dream zombie. She's an actual character, showing inventiveness, intelligence, and potential. Yet she devotes all of her mental, emotional, and physical resources to a dude. And Jack's cool and all, awesome even, but so is Sally and she won't let herself be cool because she's too focused on Jack.

In short, I would not want my daughter to look up to this tragic rag doll. Allow me to be specific.

More Like This
Barbie Honors Aviator “Queen” Bessie Coleman In Their Inspiring Women Line
These 72 Instagram Captions Are Perfect For Your Snow Day Pics
30 Messages To Write In A Valentine's Day Card For Your Child
13 Is "Too Early" For Kids To Be On Social Media, Surgeon General Cautions
What Parents Are Talking About — Delivered Straight To Your Inbox