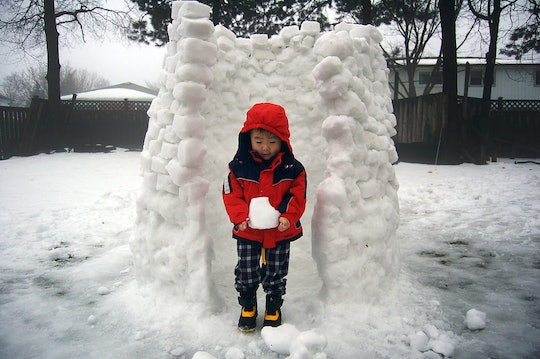 I grew up in Atlanta, which means that the term "snow day" looked a lot like this when I was a kid: Approximately once a year, usually in March, meteorological conditions would align in such a way as to indicate the possibility of snow. Once this possibility grazed the horizon for our local weatherpeople, it immediately dominated the news, complete with casual headlines like "SNOWMAGEDDON '04: We're Definitely Gonna Die This Time" and booming introductory music that played every time they updated viewers on the "developing weather situation bearing down on Georgia," which was about every 8-12 minutes. This would go on for, like, two days. Nine times out of ten, this "significant winter weather event" would amount to a light dusting of a snowish substance (it's the off-brand snow to the name-brand "real" snow that comes down in properly cold parts of the country), and even that would be melted by noon.

The fact that the non-chill-having meteorologists in Atlanta would have built up this meager snow shower to be a city-crushing blizzard, and that the city would have spent two days shining up its three salt trucks, meant that despite the fact that there would be less than no actual reason for anyone to pause their normal lives, the city would shut down: No one would drive (probably for the best, since Atlantans, for all their many charms, don't have a clue how to deal with even the slightest hint of frozen precipitation on the ground), the stores would be sold out of milk and bread, and school would definitely be cancelled.

As a kid, obviously this ruled. (And that's how I would've described my feelings about it: "This rules!" And then I would've pumped my fist in the air, grabbed a Sunny D from the fridge, and then gone off to find my puffy-sticker-covered journal write about how much it ruled, in gel pen.) All I wanted was to put several layers of socks over my hands, several layers of sweatpants on my body (Atlanta kids don't really have proper winter gear because, again, once a year, guys) and run outside to scrape all the snow from the bushes and windshields, which, when diligently combined, amounted to almost enough for one very anemic snowman (who would still end up being 40% twigs and leaves). By the time it was done being assembled and reverently gazed upon by the neighborhood kids, my sock-gloves would be soaked through and I would drag my numb extremities into the house to eat some Pizza Rolls and watch Maury. Snow days were amazing.

OK, you probably get where this is going: It's now 20-something years later, and I am the proud keeper of a small, snow-loving child. We live in New York now, where it snows considerably more. As a result, he has all kinds of proper winter gear, but the differences stop there — his tiny brain freaking explodes and melts out of his ears with joy whenever it snows.

When I was a kid, I never considered how my mom felt about snow days, but judging by my own feelings about them now, and a slightly less ego-centric look what my childhood might've been like from her perspective, I'm guessing she hated them a lot. Because I do too, and I'm starting to think that outside of simply "liking things that make our kids happy," which only goes so far, snow makes parents' lives really, obnoxiously difficult.