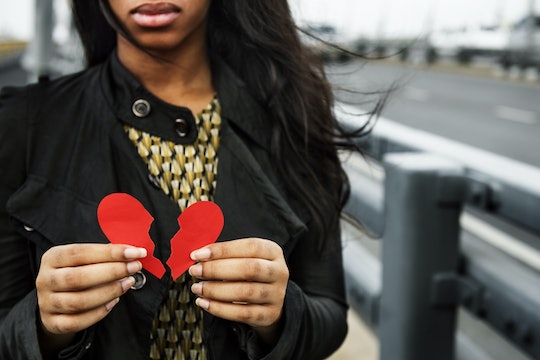 7 Ways I Knew My Marriage Was Over

Long before I signed the "official" divorce papers, I noticed and experienced more than a few red flag moments that made me realize my marriage was over. Some of them were completely obvious but others were, well, not so much. It's not easy to recognize and accept the relationship you thought would last forever, is dead. It's downright humbling and sad as hell to admit, actually, even to yourself. I mean, no one goes into a marriage knowing it will fail, but some people just aren't good together. Unfortunately, it's not always clear until you've made a promise in front of your family and friends.

My first marriage began shortly after my high school graduation. As two naive, hopeful kids in love, my (then) husband and I refused to believe we'd end in divorce (like our families said we would when they protested our engagement). For four long years we tried to salvage our relationship the best we knew how but, in the end, it wasn't enough. We lacked key relationship elements in all the right places and contributed too much to what made our relationship so wrong. When it came down to it, those two naive, hopeful kids in love couldn't be more wrong for each other.

Relationships are hard regardless, but at a time when my now ex-husband and I should've figured out who we were and what we wanted out life, making a relationship work was nearly impossible. He took a full-time job as a land surveyor while I hopped from gig to gig, looking for my place in the world. Our finances we a constant issue and, aside from all the love that brought us together, we had little else connecting us to one another. I look back on this time with much regret, because I missed out on getting to know myself (and I denied him that right, too).

When we finally split we realized we had committed to something far bigger than we appreciated or could handle. While I'm grateful for the experience now (because all the steps led to my now husband of nearly 10 years), I'm also thankful I recognized the red flag moments our marriage was done. It's not easy to say goodbye to someone you love, but I'm positive it was for the best. With that, here are some signs I knew my marriage was, well, doomed: