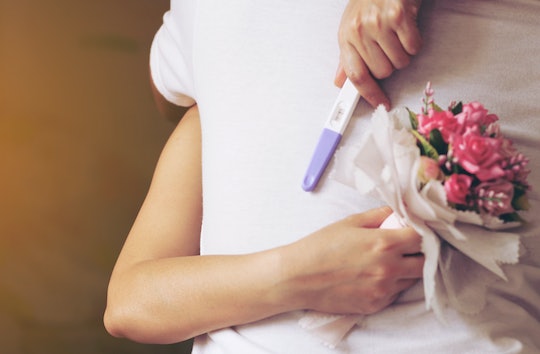 I always knew I wanted to have more than one child. Having grown up with a younger brother (as much as I hated him at times), I can't imagine going through life without him. Once my daughter was around 3, I was ready to try again and — like my partner who handled it like a freakin' champ — there are responses every grown-ass man has when you tell him you want a second baby. (For the the record, it's not, "Why?" or an abrupt "No."

For me, the thing about feeling ready to start trying again meant the feeling wouldn't dissipate until I became pregnant again. It started as a vague thought and eventually morphed into, "I need another baby now!" Getting pregnant the first time was a real feat. On birth control, my partner and I definitely hadn't planned to be parents any time soon. We were young and unsure of our paths but, once we knew, there was no question we'd figure it out and have our baby. Scared but elated, that pregnancy was a learning experience in many ways. I essentially grew up through that process which is why it took some time after the birth to even think of having another. Still, once I had, there was no convincing me otherwise.

Sadly, my body disagreed as I'd have to first go through two miscarriages before successfully becoming pregnant again. As a stay-at-home mother to our first, my feelings of wanting another baby intensified through all of this and, at times, I felt hopeless. One thing that never, ever wavered was the support of my partner. As a grown-ass man, he knows that when something really matters to me, it should also matter to him. With that being said, here are some of his responses that every grown-ass man should abide by when his partner wants a second baby (in my humble opinion).