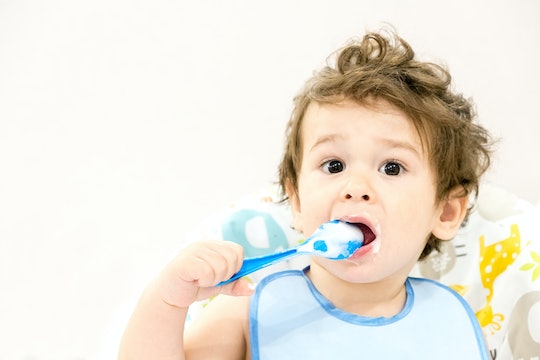 Starting your baby on solid foods is an exciting time for a parent, but it can also be a little nerve-wracking. New foods have the potential to trigger allergic reactions, which can range from mild to severe. Since your baby can't speak up and tell you when something's wrong, you'll want to be aware of the many signs of food allergies to look out for.

If you think that you're hearing a lot more about food allergies these days than you did when you were a kid, it's not your imagination. "Data shows that childhood food allergies have become increasingly common in recent decades," says Dr. Thomas Casale, the Chief Medical Advisor to Food Allergy Research & Education, an organization dedicated to raising awareness about food allergies. If you're worried your child might have one, it's something you'll want to address as soon as possible. "Suspected food allergies should always be evaluated, diagnosed and treated by a qualified medical professional, such as a board-certified allergist," Casale tells Romper via email. "Do not diagnose a food allergy on your own. Self-diagnosis can lead to unnecessary dietary restrictions and inadequate nutrition, especially in children."

There are eight common allergy culprits, according to Kids Health: milk, soy, eggs, wheat, tree nuts, peanuts, fish, and shellfish. It may seem counterintuitive, but it's generally advisable to introduce these foods sooner rather than later, according to the American Academy of Allergy, Asthma, and Immunology (AAAAI). The AAAAI noted that delaying the introduction of possible allergens might actually make your child more likely to develop an allergy. Somewhere around 4 to 6 months, you can start introducing new foods one at a time every couple of days. That way, if a reaction happens, you'll be able to tell which food caused the problem. But of course, always discuss your plans with your child's pediatrician first.

Keep in mind that an allergic reaction might not be immediately obvious. Dr. Casale notes that these seven symptoms could appear anywhere from minutes to hours after trying a food. People can also react differently at different times and "even if the worst seems to have passed, a second wave of serious symptoms can happen," according to KidsHealth, so it's important to seek medical attention as soon as you notice symptoms, especially if "the symptoms involve two different parts of the body, like hives with vomiting," they explain. Dealing with food allergies can be a scary situation, especially if it is your first time. Here are some signs to watch for, and remember, you got this.

More Like This
How A Recall Of Contaminated Formula Made The Formula Shortage Crisis So Much Worse
Here’s What You Need To Know About That Viral 1960s Baby Formula “Recipe”
Can You Help Your Baby’s Hair Grow?
Here's When Your Baby Might Start Sleeping Through The Night For Real