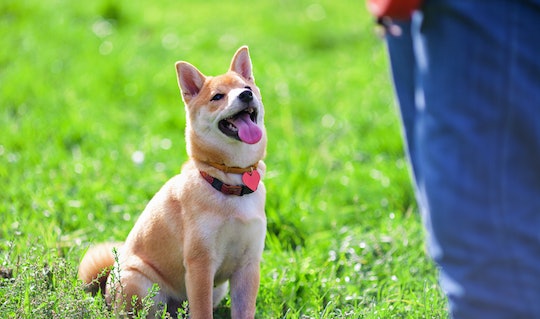 My son is lobbying hard for a dog. He's been doing this for years and we compromised last year by getting him two kittens. He likes them but insists they aren't nearly as responsive or smart as a dog. They don't respond to their names and they only seem to know two words: snack and eat (and yes, those are practically the same thing, so you can see where their priorities lie). Turns out, my son may be onto something. There are so many signs your dog understands you in ways that other animals just don't.

Dogs can be very responsive to verbal cues and to non-verbal ones. They sense emotion and interact with their owners accordingly. As my son says, "when they look into your eyes, they see your soul." It does feel like that sometimes. When your dog cock their heads toward you, it truly feels like they are listening, and when they actually do what you ask it's like a small miracle because you don't expect an animal, particularly one that furry and cute, to understand the human language. In fact, it may seem like you're dealing with a toddler, and that's probably because dogs have the intelligence level of a young child. "A 2011 study published in 'Learning & Behavior' found that domestic dogs are roughly as intelligent as a 2-year-old human. That means that they are capable of understanding the meaning of roughly 165 words and that they can make sense of body language," reported Dog Notebook.

If you are spending quality time with a dog these days, it's probably obvious to you that your dog understands you, but here's how to know for sure.