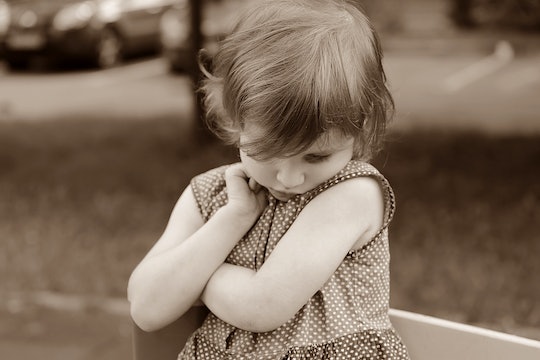 7 Signs Your Kid Is Shy, Not A Snob

As a kid, those who knew me well often described me as fun, outgoing, and a little crazy. But put me in a new social setting where I didn't know anyone, and my stomach was sent into nausea mode. (One particular 4-H meeting is forever etched in my memory). More often than not, my introverted personality came across as rudeness, eve though that was never my intention. Now, looking back through the lens of an adult and mom to a shy child myself, I'm much more aware of the signs your kid is shy, not a snob, that will play a big role in their self esteem and the way you parent them.

As an adult, I've learned to break out of my childhood shell. More importantly, I've learned not to judge anyone, especially a child, by their "cover", because oftentimes shy behavior can be mistaken for something else.

Even though I was too nervous to join the soccer team and preferred to keep to myself around large groups, my shy behavior shouldn't have been mistaken as snobbish. And it's a stereotype I refuse to perpetuate in my own daughters or any other child who is naturally shy. If you're worried that your child is being seen as a snob, here are some signs that they are simply shy.