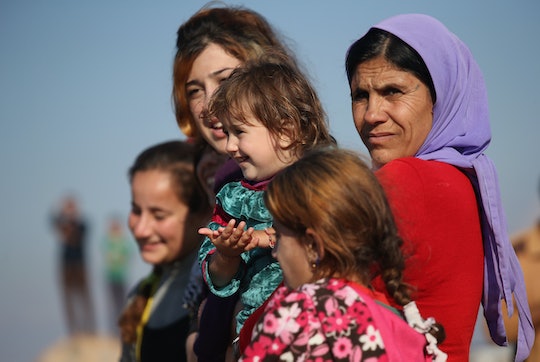 7 State Governors Welcome Syrian Refugees With Open Arms, But They Seem To A Small Minority

Since the Paris terror attacks on Nov. 13, many have turned their backs on Syrian refugees, especially since it came to light that one of the attackers entered Europe as a refugee by using a false Syrian passport. In fact, 31 state governors have publicly stated that refugees are not welcome. However, seven state governors have shown support for Syrian refugees, going against the grain by announcing their acceptance.

Colorado, Connecticut, Delaware, Hawaii, Pennsylvania, Vermont, and Washington have all shown their public backing of President Barack Obama's plan to help relocate Syrian refugees into the United States. So far, over 1,500 refugees have made the United States their home — only a fraction of the refugees other countries are accepting — but many governors have called to cut ties entirely. Jeb Bush even suggested that the United States accept only Christian refugees, an idea Obama called "shameful."

She even threw a little shade, while she was at it:

Connecticut Gov. Daniel Malloy joined in to put security threats in perspective: "The numbers are relatively low getting here under any circumstances," he told NBC, likely referring to the fact that the United States takes in only 3 percent of Syrian refugees. He stressed safety, but added, "On the other hand, America has always had a big heart."

Of the governors who aim to refuse refugees, Vermont Gov. Peter Shumlin said, "The governors who are taking those actions are stomping on the qualities that make America great." But just by glancing at Twitter, you can see that many Americans are not exactly in agreement.

Others? Not so much.

As it turns out, those who oppose the admittance of refugees can't actually deny them entry — that's a federal decision, not a state one. But they can make things much more difficult in the process, American University law professor Stephen I. Vladeck told CNN. "A state can't say it is legally objecting," he explained, "but it can refuse to cooperate, which makes things much more difficult."

Terrorism has been able to make headway because of the fear it instills in people — and it seems to be working in 31 states so far. Despite the fact that none of the terrorists in the Paris attacks were actually Syrian, here we are, debating whether or not to let thousands of families into the country because of the acts of nine men in Paris.