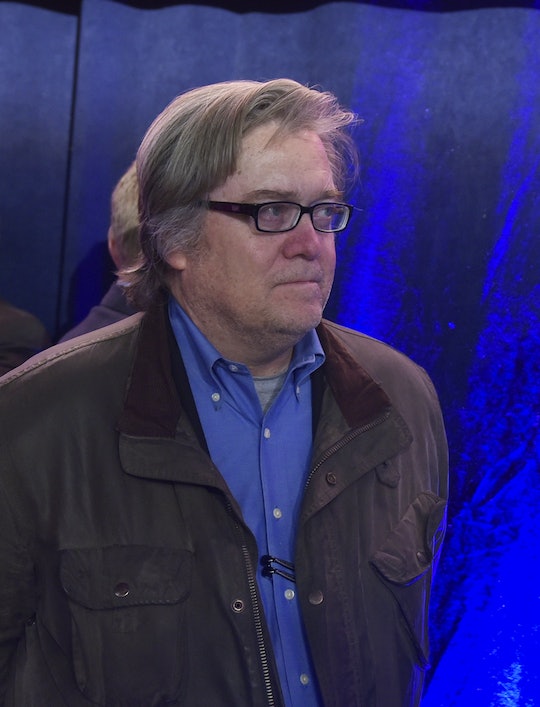 7 Steve Bannon Quotes On Race That Are Seriously Concerning

President-elect Donald Trump proudly ran an unconventional campaign that broke from political norms and traditions. Now that that he is filling out his staff, he's filling it with "unconventional" advisors like Steve Bannon, the former head of Breitbart News, a website that Bannon himself has called a platform for the alt-right. Bannon has said many cringeworthy things about all sorts of demographic groups over the years, but these Steve Bannon quotes on race might be the most troubling of all, if only because, well, they're racist. To the Bannon supporters and those who want to give Trump a "chance" at bringing the country together, these quotes are largely non-controversial, even though they only serve to prove that Bannon and those like him believe that racism doesn't exist or that it's a problem.

That's a huge problem when it comes to federal leadership — at least it should be. Given America's long and troubled history with race — remember that African Americans weren't even allowed to vote until just a few decades ago — a president should probably have advisors and counselors that at least acknowledge that history, if only to help us all move forward, right? Yet Trump's new chief strategist (who doesn't have to be approved by Congress, by the way) seems to deny it.

Trump is also taking office during a time of heightened racial tensions, when police departments across the country are dealing with officer involved shootings of unarmed black men. Under President Obama, the Justice Department has investigated some of these shootings and in Baltimore, at least, found evidence of the very same systemic racism that Bannon denies.

Calling Bannon's comments racist isn't some liberal hysteria. It's looking long and hard at his words, in context, and connecting the dots. He might not call himself a racist, but his very own statements, made in public, suggest otherwise.

Let's all get to know Bannon's face and ideas about race in America.

He Thinks Race Is About 'Victimhood'

According to BuzzFeed, Bannon said in 2011 that the progressive movement was all about victimhood:

He Thinks There Are Too Many Asians

In November 2015, Bannon spoke to Trump on his SiriusXM radio show about some of his immigration policies. For once, Trump seemed to be lenient about certain immigrant communities. Bannon wasn't so sure that all immigrants, no matter how skilled, should be allowed to stay. He said:

When two-thirds or three-quarters of the CEOs in Silicon Valley are from South Asia or from Asia, I think... A country is more than an economy. We’re a civic society.

He Does Not Think There Is A "Major" Race Problem

While on Karen Hunter's SiriusXM show in July (yes, just this summer right after the shooting of Alton Sterling and the police shootings in Dallas), Bannon said, “I do not believe we have a major race problem in this country. I just don’t," adding,

He Doesn't Mind Hosting The Alt-Right

Bannon has said on multiple occasions that his website, Breitbart News (you can air-quote that if you'd like) was the platform of the alt-right, which is made up of white supremacists, nationalists, Islamaphobics, anti-semites, and all the trolls that harass females on social media. But Bannon thinks everyone is being too hard on them, according to Mother Jones:

Wait, Let's Go Back To Black Lives Matter For A Second

This is from a post Bannon wrote in July about how Black Lives Matter is a left wing conspiracy and he delves into the minds of the men who were shot. He suggests "some people" are just "naturally" violent:

What if the people getting shot by the cops did things to deserve it? There are, after all, in this world, some people who are naturally aggressive and violent.

In that same interview with Hunter in July, he almost sounded like a naive liberal, talking about a post-racial society:

Cities like Richmond and Baltimore and Philadelphia have black mayors, have black city councils, have black police commissioners. How can it be systemically racist if these men and women today are actually in control of the city?

How About A Little Anti -Semitism With That?

Bannon's ex-wife said that disagreements about where to send their children to school was a problem long after their divorce in 1997, after she made allegations that he abused her. (The case was dropped when his ex-wife did not show up to court, and a rep told Politico that the two had a "great relationship.") In 2007, when they went back to court to settle these custody disputes, his ex-wife Mary Louise Piccard claimed,

For his part, Bannon's spokesperson told The New York Daily News, "At the time, Mr. Bannon never said anything like that and proudly sent the girls to Archer for their middle school and high school education."

Bannon supporters can say that he's not a white nationalist or a white supremacist or whatever they want to. The fact is that he ran a website for years, at the very least, that was by his own admission a platform for white nationalism. On that matter, too, he doesn't see anything wrong with nationalism. "If you look at the identity movements over there in Europe, I think a lot of [them] are really 'Polish identity' or 'German identity,' not racial identity. It's more identity toward a nation-state or their people as a nation," he told Mother Jones in August.

(As a side note, the nationalist movements in those countries are about keeping the countries "pure," like the French National Front, led by Marie Le Pen, which has been accused of inciting racial violence. It's also just not a great comparison to make anyway, since nationalist movements in Europe that lean to the super right are steeped in fascism.)

That Bannon would make the comparison, happily cater to the alt-right, and organize the group around a Trump candidacy is worth noting. Much like Bannon's public quotes about race, his appointment as chief strategist to a president of the United States is unprecedented.