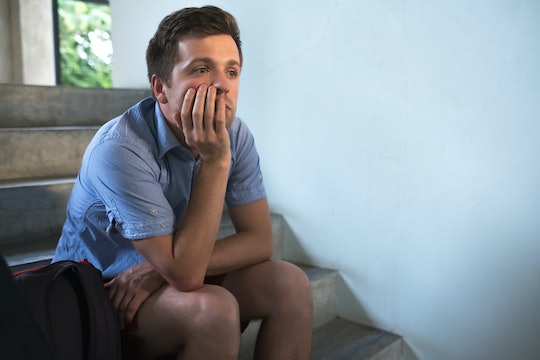 Perhaps not entirely surprisingly, there's a lot of misinformation out there when it comes to periods. And though you might expect that men would be the only ones that are sometimes misinformed, women can also believe in period myths, particularly if they were passed down from old sisters, moms, aunts, or grandmothers who learned them before them. Still, there are some surprising things men think about periods, potentially because, all too often, they're never really taught about periods, as a 2010 study published in the Journal of Family Issues found. They just pick information up wherever they can find it, be it from siblings, parents, friends, or romantic partners. So it's not always their fault when they don't understand every little detail. But some also probably should know more than they do, and part of that is setting the record straight on some of the more pervasive period myths, especially ones that men, in particular, seem to believe to be true.

If you're a man with close relationships with someone who gets a period, whether that be a sibling, best friend, romantic partner, roommate, or coworker, you may have, in the past, said something about periods to that person that wasn't exactly right (or was something that seemed a bit outlandish to the person hearing it). And if they corrected you or reacted strongly, you may have felt a bit embarrassed. But it's still important for everyone to separate period fact from fiction. And some of the things that men seem to ardently believe about periods falls firmly into the fiction category.