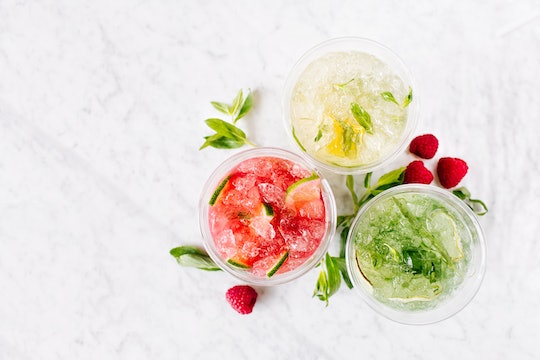 7 Tasty Drinks That Won't Give You A Horrible Hangover

There is no joy in a hangover. Sure, throwing back a third shot of Fireball makes you feel like a champ in the moment, but come morning you'll be singing a whole different tune. So how can you maximize your drinking fun and minimize the subsequent nausea and headache? Simple — choose drinks that are less likely to cause a hangover. With any luck, you’ll wake up the next morning feeling like your usual self, instead of feeling the aftereffects of your beverages.

Of course, the most obvious way to stop hangovers is to drink in moderation. “Knowing when to stop is key,” as Samara Rivers, Founder of Black Bourbon Society, tells Romper via email. “Know your limits and stick to them, even if your friends aren't.” In addition to the amount of alcohol you’re drinking, pay attention to the pace and take it slow. “The faster the intake, the more likely of a hangover,” Keith Wallace, sommelier and founder of the Wine School of Philadelphia, tells Romper in an email.

To get a better sense of your own alcohol tolerance, try out the BAC Calculator from Yale, which uses input about your own body composition and the number of drinks consumed. It lists your blood alcohol content (BAC), as well as the possibility for a hangover the next day. (As it turns out, throwing back two drinks within an hour is enough to give someone with my stature a minor hangover, which is not news to this lightweight.)

Before getting into the drink specifics, it’s helpful to know more about how alcohol works on the body to trigger a hangover. Drinking alcohol can increase your need to urinate (leading to dehydration), irritate your stomach lining, trigger an inflammatory immune system response, and tank your blood sugar, as explained on the Mayo Clinic. It can also expand blood vessels, causing those famous headaches. Hangovers are a total body experience, often in the worst way possible, and they don’t affect everyone the same way. In fact, genetic factors accounted for about 40-45% of a person’s hangover frequency variation, according to a 2014 study in Addiction. In other words, that friend of yours who never seems to get a hangover may be genetically blessed.

With all of this in mind, there’s also one particular ingredient in alcoholic drinks that experts caution against. Essentially, sweetened drinks can go down a little too easily, making it difficult to watch your intake.

“Sugar and sweet additives like liqueurs and syrups make hangovers worse,” says Rivers. “It's not necessarily the sugar itself, but the fact that sweet cocktails mask the taste of alcohol making it easier to drink more cocktails in a shorter time frame.” Most every expert interviewed for this article mentioned sugar as well. “In addition to alcohol, the consumption of sugar can possibly increase dehydration as well, causing a hangover to feel more severe,” as Brittnay Perlo, Master Cider Maker at Austin Eastciders, tells Romper via email. “A high amount of sugar in combination with alcohol can give you a pretty nasty hangover.”

Sugar isn’t the only additive that can intensify a hangover. “Congeners are chemical compounds, formed during the fermentation and aging process, that help give the alcohol its flavor and color,” as Robin Bent, founder of the hangover-helping startup LiveLife, tells Romper via email. “One congener, methanol, can turn into formaldehyde in the body, triggering sweating, headaches, and dizziness.” Darker alcohols tend to have more congeners, so this means that brown liquors such as whiskey, brandy, scotch, and aged rum can leave you feeling pretty rough, as Bent further explains.

So if you’d like to drink a bit without risking a hangover, then opt for the drinks below. Of course, this list isn’t going to work for everyone the same way and throwing back enough of any drink will still end in a hangover. But for the most part, they won’t cause a hangover as quickly as their sugary, congener-filled counterparts.

More Like This
Dunkin’s New Summer Menu Is Here At Last
Can The Baby Have That?
9 Surprising Signs You Might Have A Sugar Intolerance
What You Need To Know About Costco’s Fourth Of July 2022 Hours

This article was originally published on Dec. 4, 2015