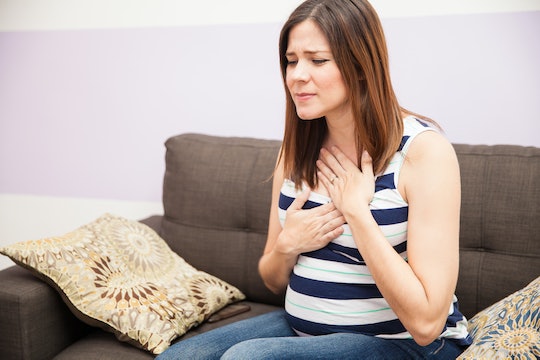 Most people have experienced that uniquely horrible burning sensation known as acid reflux after finishing a rather delicious meal. While the food is, in my opinion, usually worth the burn, acid reflux is no joke. In fact, over time it can cause damage to the esophagus. Between potentially long-lasting medical problems, and the daunting list of things acid reflux actually feels like, it's no wonder people avoid deliciously spicy food altogether. Which is a damn shame, if you ask me.

According to The Mayo Clinic, acid reflux is "the backward flow of stomach acid into the esophagus — the tube that connects the throat and stomach — where you may taste regurgitated food or sour liquid at the back of your mouth or feel a burning sensation in your chest (heartburn)." And, according to Healthline, "During pregnancy hormone changes can allow the muscles in the esophagus, including the LES, to relax more frequently," which is why pregnant women can experience acid reflux at higher rates. Lucky us, right ladies?

Aside from the occasional bout here and there, I didn't really experience much acid reflux until my first pregnancy. But when I was pregnant with my second, oh holy hell. It was all hands on deck. The seemingly never-ending stream of dragon fire creeping up the back of my throat kept me up at night, distracted during the day, and with a horrible taste of food in my mouth.

Thankfully, I don't get reflux nearly as often as I did when I was pregnant. Every now and then, though, I still get a reminder of that excruciating pain. It's like a cruel form of birth control. Just kidding. Kind of. So, with that in mind, if you're staring pregnancy in the face and wondering what's in store for you, here's what acid reflux actually feels like:

More Like This
New Report Shows 80% Of Pregnancy-Related Deaths Are Preventable
Zaya Wade Is Rocking New Long Hair & As Gabrielle Union Put It, She's A "Vision"
Are Boy Babies Usually Late? Signs Your Baby May Be Born Late
27 Sweet & Strong Boy Names That Start With “S”