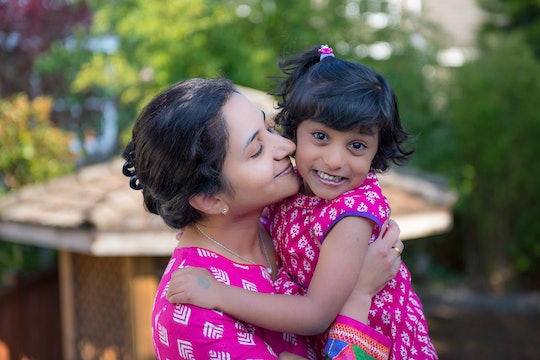 7 Things Feminist Moms Teach Their Daughters About Their Bodies

When I was 7 years old, two girls in my neighborhood told me I was too fat to be Catwoman in our game of Batman. I came home crying and my mom asked me what was going on. When I told her, she didn't comfort me, or tell me those girls were awful, or fall over herself to assure me of how extraordinarily gorgeous and skinny I was. She neutrally, but warmly told me, "You're just right."

More Like This
18 Best Sand Toys In 2021 For Babies, Toddlers, & Kids
28 Subscription Boxes For Every Kind Of Kid
The 7 Best Water Tables For Your Little Ones
The Best Splash Pads For This Summer

She said it with such casual authority that I believed her without question and felt better. I'm now 32 years old, and I can still tell you exactly how I felt in that moment. It was like a wave of happiness had washed over me, taking with it any self-doubt. My body was what it was supposed to be. It was just right, like Baby Bear's porridge in Goldilocks. I've thought a lot about that moment since then, and see it as a turning point in how I would go on to feel about my body in the years to come. My friends' telling me what I couldn't do based on my size wasn't the first hurtful comment lobbed at my body, and it certainly wasn't the last, but my mom's response — "you're just right" — anchored me.

As I got older and thought about having children, I knew I wanted to be the kind of mom who could do what my mother had done: create a foundation upon which the statement "you're just right" could be accepted as an answer and believed as a philosophy. Because while I credit this one particular comment as being pivotal in how I would feel about my body throughout life, I know that, in truth, it was just one of thousands of body positive messages I received over the years. I knew that any "Eureka!" moments my children would have about their own self-esteem would have to spring from fertile ground. A lifetime of confidence building.

I wanted this for all my children, boys and girls, but knew, practically speaking, that this would almost certainly be a more important message for any daughters I might have: they would be faced with much more scrutiny, expectation, and judgment about their bodies than my sons. It would also be harder to convince girls that they were "just right." We cannot shield our daughters from the cacophony of mixed and harmful messages they will hear about their bodies over the course of their lifetimes. But as their parents, we have the opportunity to be the loudest of those myriad voices. Whether it will be louder than the collective others remains to be seen.

So what messages do we send?