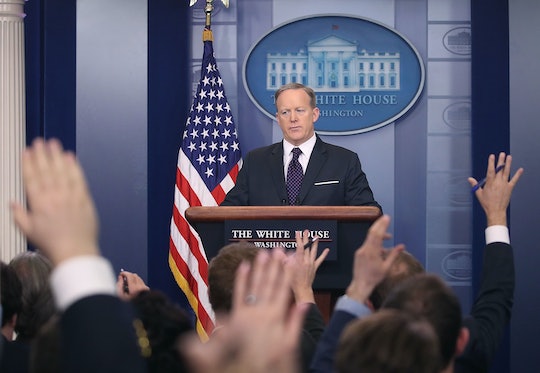 During his daily briefing on Thursday, White House Press Secretary Sean Spicer repeatedly dodged questions from reporters about House Intelligence Committee Chairman Devin Nunes, claiming that it wasn't his job to answer questions, and that confirming and denying stories is "very slippery slope." But if it's not Sean Spicer's job to answer questions from reporters, then what is his job? Isn't that the whole point? Not so, according to Spicer.

It seems that the actual role of White House Press Secretary is to scold and insult reporters when the president isn't available to do it. For some reason, though, the press got it into their heads that if they asked him to verify an explosive New York Times report alleging White House meddling in the Russia investigation, he'd provide some sort of information. Ridiculous! As Spicer told them, "I never said I would provide you answers." The expectation that a press secretary would provide answers to reporters during a briefing is a pretty wild assumption, and it makes you wonder what other bizarre expectations people might have for Spicer. Do they think he's going to drive his podium around like a Segway, ramming it into people? Get real, you guys.

In order to make sure we're all on the same page, I've compiled a list of a few other assorted tasks that are most definitely not Sean Spicer's job, and I certainly hope that the White House press pool makes time to give it a quick skim, if only to save themselves from making another embarrassing mistake. He's a press secretary, people, not an answering machine. Other things that aren't Spicer's job include:

Shortly after the inauguration, Spicer confirmed to the press that his boss believes that millions of people voted illegally in the election, despite having no proof. When asked if he personally believed that, Spicer scoffed. "Is it my job? No." Spicer is not required to believe in voter fraud, Santa Claus, or the idea that the children are our future. He believes in nothing, just like the Nihilists in The Big Lebowski.

Sean Spicer hates Dippin' Dots, and maintains that it is not the ice cream of the future. If it was his job to promote Dippin' Dots, he would have been fired long ago.

Like a dog with a bone, reporters just won't let go of Trump's unsubstantiated voter fraud claims. On the Fox News program Media Buzz, host Howard Kurtz brought it up again, and asked Spicer if he embraced the idea. "That's not my job, OK?" Spicer replied. Does he look like a hippie giving out free hugs at a Phish concert? Spicer doesn't embrace jack!

Let's get things straight here: Sean Spicer is a passionate man. Would you tell a painter not to paint? A dancer not to dance? Of course not. Spicer is an artist, and his medium is anger.

Dressing Up As The Easter Bunny

Although Spicer used to play the Easter Bunny at the White House Easter egg roll, sadly, he has moved on to a new role.

Of course Spicer is entitled to have opinions, and we know of at least one that he's formed in his free time. But is it his job? When asked during a briefing if he agreed with the president that the press should be nice, and whether he thought that they were, he replied, "I think that I've been asked for my personal opinion several times. That's not my job." Do not hand Sean Spicer a note asking him, "Do you like me? Circle yes or no." He will not circle either one. He will crumple the note up and swallow it whole. He has work to do.