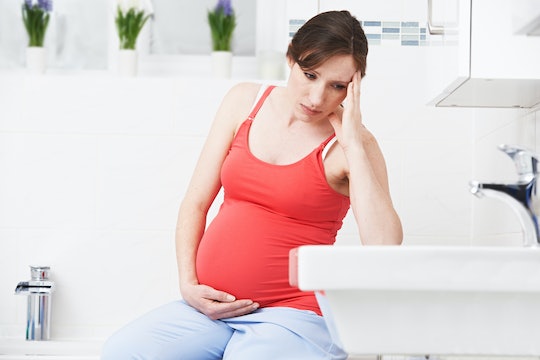 7 Things To Know About Pregnancy Hemorrhoids

There are so many exciting things to look forward to when you're pregnant. Hearing heart beats, feeling fluttery kicks, eating and resting a little differently than you normally would — all of these count as pregnancy perks. But there are some annoyances that come with pregnancy too. One not-so-pleasant part of pregnancy? Those pregnancy hemorrhoids that are bound to pop up at some point. If you've been pregnant before, pregnancy hemorrhoids may be old hat. But if this is your first go-around with them, there are a few things you need to know about pregnancy hemorrhoids.

Pregnancy hemorrhoids — also known as piles — are, obviously, just like hemorrhoids that you can get when you're not pregnant. They're swollen veins in the rectum, according to WebMD, which, as I'm sure you can imagine, can be quite uncomfortable. According to What To Expect, pregnancy hemorrhoids most often appear in the second or third trimester and can sometimes look like grapes or marbles, which just might be why they're so uncomfortable. But why are they so common in pregnant women? Well, there's more blood circulating through your body than normal. There is a chance you can avoid pregnancy hemorrhoids. But if you're unlucky enough to get them, here's what you need to know.