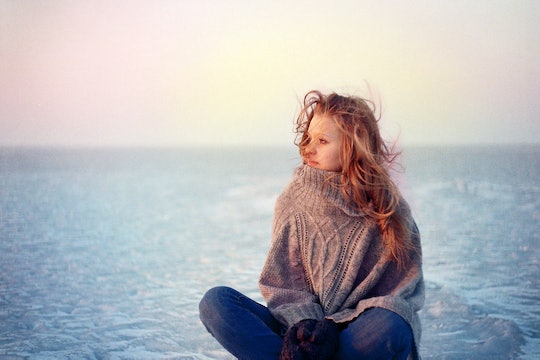 I honestly have no idea how I became pregnant the second time. I mean, yes, tab A into slot B, egg meets sperm, yadda yadda yadda and all that health class jazz, but I was terrifically surprised. I had been tracking my very regular cycles and looking back even now, I can’t figure out when I might have conceived. But there it was: a positive pregnancy test staring back at me. It was one of the digital ones, so there was no misinterpreting or imagining a pink or blue line. I’d only really taken it on a lark, a way to officially write off the cramping, tiredness, and spotting I’d had over the last few days as the telltale signs of a particularly rough period, not a baby. But it seemed that’s what we were facing, about six months earlier than we’d planned to start even trying for another.

As the word “pregnant” appeared, I remember blinking hard and feeling a familiar wave of shock that had hit me me when I found out I was pregnant with my (also unplanned) son. But I did quick mental math: He would be just shy of two and a half when this new baby was born. That wasn’t so bad—that was about the age gap between me and my brother—and my shock turned into a laugh. “Hey sweetie,” I called as I walked down the stairs, holding up the stick, “It happened again!”

My husband’s reaction was pretty much exactly the same as mine: laughing shock, a shrug like, “Meh, a little sooner than planned, but that’s fine if not ideal,” and happiness. We hugged and kissed. I began imagining my son as a big brother, taking guesses as to whether this would be a boy or a girl (I guessed girl), thinking about how I would suggest that if it were a boy I wanted to name him Malcolm and not Henry, as my husband and I had always said. This was a Wednesday.

On Saturday, the light pink “implantation bleeding” that I’d been assured by Google and a few select friends and all my pregnancy books was totally normal turned bright red. This could still be normal, but that’s when they tell you to see your doctor. Because while it could be normal, it could also be a miscarriage. I knew that’s what it was. That night I took another test to prove it to myself: “Not Pregnant.” This time the digital lack of ambiguity wasn’t comforting. I didn’t cry then. I heaved a sigh and thought, “Well, that’s that.”

But that wasn’t that. I still held onto hope the rest of that day, Sunday, and Monday morning, at which point I went to my OB/gyn. I’d scheduled the appointment to see how far along I had been and whether I would need a D&C to remove the remaining tissue. And though I knew, logically and deep down that I was no longer pregnant, there was a middle depth between the two that still hoped. That dreamed my sweetheart of a doctor would look at the ultrasound and say, “Look at that! The little guy is doing just fine. Why did you make us worry, you tricky little one?”

But the ultrasound showed nothing: nothing alive and nothing remaining that wouldn’t expel itself naturally over the next few days. I still didn’t cry. I’d known, hadn’t I? So what was there to cry about? Plus, it’s not even like I planned this pregnancy, so I could just sort of move forward with a tinge of melancholy and no real regrets.

But the heart doesn’t work like that. About a week later, I had my first cry, a gasping for air, heartbroken admission that I wasn’t okay with what had happened. Even though I only knew I was pregnant for a few days, it took me a few months to go through complex waves of emotions before reaching a place where I was basically at peace. I didn’t tell very many people about this miscarriage in that time. I felt ashamed as a woman, like my body had failed to do what it was supposed to do. On top of being sad and disappointed, I was deeply embarrassed. Even then I knew this was entirely ridiculous and that I had absolutely nothing to be ashamed or embarrassed about, but that didn’t alleviate the feeling and it only made me feel embarrassed about my shame and embarrassment.

The few people who had known, and the fewer whom I told in the days and weeks after the fact, were lovely. I got texts and messages checking in on me, even when I didn’t want to talk at first, but needed to. They sent me chocolates and cards and presents for my son. Almost three years later, I remain grateful for the many kindnesses I received in the weeks following my miscarriage, from those who said even one thoughtful “I’m sorry” to those who realized I would need them to check in on me weeks afterward, even though I didn’t realize it myself. I remain grateful that, in those extremely vulnerable months, I was not on the receiving end of some “comfort” that I would hear later on, either in regard to my own loss or someone else’s. Fortunately, by then, I was able to merely be offended by the things that were said and not hurt.

I’ve gathered seven of those misguided and all-too-common suggestions and “condolences” here. Please, please, please: Never say these things to anyone dealing with a miscarriage.