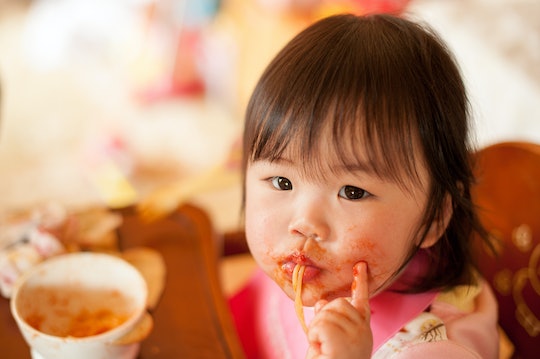 7 Things Your Picky Eater Might Be Trying To Tell You

Almost every child I've ever known has gone through some sort of "picky eating" stage. A lot of the time it's short-lived and parents just kind of ride the wave until their sufficiently through it. Other times? Well, other times it's more than just a phase. When picky eating becomes a consistent eating habit, it could be a sign there are things your picky eater is trying to tell you and, well, it usually involves more than just that the fact that they don't like vegetables.

For the longest time, my daughter ate incredibly well. We fed her sweet potatoes, any type of meat under the sun, spinach, cauliflower, avocado, eggs, cheese, berries, apples, pretty much everything that was good for you was fair game. My parenting friends, it was glorious. Then I got pregnant again, developed perinatal depression and anxiety, and turned into what I considered to be a less than ideal mother. It was during that time that my daughter started saying "no" to spinach and "yes" to french fries. It's taken some time, and there are still lots of compromises, but she is gradually finding her way back to more vegetables and seemingly care-free eating habits she originally had. For example, I considered yesterday a huge win because she had half an avocado as a snack, cucumbers for lunch, and steamed cauliflower with dinner. This morning, she tried (and loved!) lentils. Baby steps, you guys. Baby steps.

In the time my partner and I have worked intentionally to establish healthy eating habits with our daughter, I have realized that her picky eating habits were (sometimes) an attempt at communicating with me. Essentially, she was telling me something, she just lacked the communication skills to do so without refusing her once-favored, healthy treats. If you find yourself experiencing much of the same, here are 7 things your picky eater may be trying to tell you: