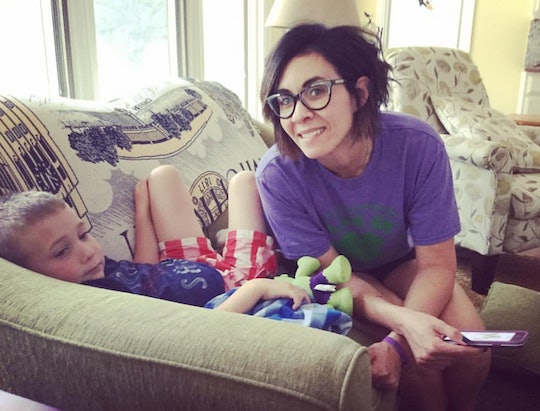 It's been about a week since my youngest had a timeout. Though he doesn't need them that often, he really doesn't use them in an effective way, either. Still, I continue to use timeouts with the hope that one of these days he'll calm down, breathe, and re-center. As a 5-year-old kid, I suppose it's a lot to ask of him. Timeouts worked for my daughter, though, so I have faith. Then again, the things you're teaching your kid when you give them a timeout have started to give me cause for concern, or at least a reason to step back and assess whether or not this particular brand of discipline is beneficial. If I'm truly being honest with myself, I have to admit that I've neglected to think about what I'm telling my child when I put him in timeout, and those messages could potentially alter our relationship entirely.

Admittedly, there are plenty of times I need a timeout myself. Sometimes one of my children will do something (even after I've asked them not to) that creates a minor/major panic attack I can't help but feel, and screaming "go to timeout" seems to be my easiest response to a situation I feel somewhat out of control of. In other words, my children's timeouts are really chances for me to have a timeout of my own.

As both kids grow older, though, I'm constantly faced with new challenges. Timeouts aren't always the best consequence but, for some reason, I keep trying to make timeout happen. Maybe by sitting my 10-year-old daughter on the same stoop she's known for years, I'm teaching her to never give up on her dreams? Far stretch? Probably. I'm seeing that what I've been doing hasn't worked because it's sending all the wrong messages. I thought I was doing a good thing by choosing a non-physical consequence, but if any brand of discipline isn't working, I should start thinking about why instead of doubling down. After all, the examples I set matter, and I'm starting to think that timeouts aren't as beneficial as I had hoped. So, with that in mind, here are some things you're probably telling your child when you put them in timeout, and perhaps even a reason why it's time to start using an alternative.

More Like This
Real Parents Share What Time They Let Their Kids Rip Into Gifts On Christmas Morning
If Your Kids Love Their Elf, You Don't *Have* To Put Him Away On Christmas
Festive Mommy & Me Holiday Nail Ideas To Try
101 Advent Calendar Activities, From Books To Read To Cookies To Bake