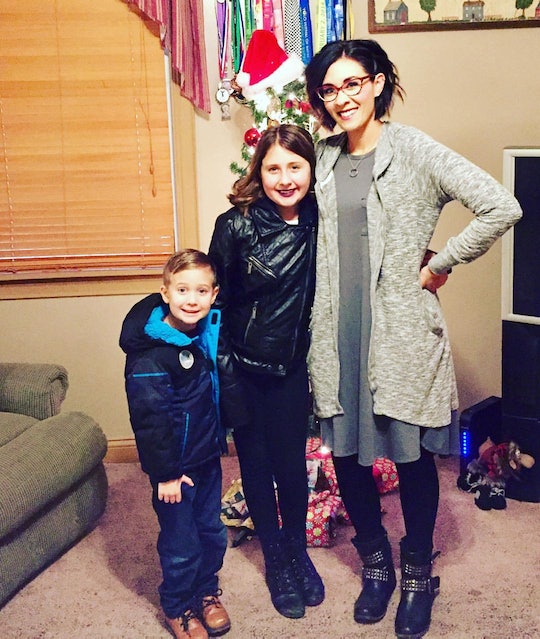 Being A Mother Reminds Me Of My Power & Strength

Before I became a mom, I didn't exactly know what the hell I was doing. I knew the path I wanted to take and the woman I wanted to become, but there was no clear plan of how to do those things or be that person. Having survived a difficult childhood, then a failed marriage fresh out of high school, I thought I'd be doomed to fail no matter what I did. Then I had children. Being a mother reminded me I'm powerful, strong, and independent because, in raising them, I often see myself reflected back at me (the good and the bad, of course).

Growing up, through my parents' volatile divorce and romances thereafter, I looked up to my grandmother who, arguably, was the greatest low-key feminist of our time. Working long hours in a glass factory alongside her male counterparts, against the wishes of my grandfather who'd wanted her to stay home and care for their two children, she was as fiercely independent as they come. Long before that, diagnosed with tuberculosis in her late teens (just after marriage), she'd have to abort her pregnancy to save her life and sent to a sanatorium through the length of her illness. This wreaked havoc on her underlying mental illnesses, such as depression, and more than a few times she'd attempt suicide.

While my grandmother's life was far different than the one I currently live, she was my person — that one being I looked to for advice, guidance, and support through all the ebbs and flows of life. I lived with her off and on throughout high school and even years after. When I went through a divorce at just 22, she was there. When I suffered a miscarriage, she was there. I knew as long as she was on this earth, I'd somehow be OK. Then, all the things her body had been fighting finally took their toll, including congestive heart failure, and this woman I needed to remind me of my strength would soon disappear into nothing but a memory.

When I had my daughter 10 years ago, I wasn't so sure I'd be very good at mothering her. My own mother, whom I've grown so very close to in my adult years, wasn't very good at mothering me (which is why I turned to my grandmother so often). I feared the gene had been passed along and I'd fail my child before ever even trying. When I was diagnosed with Postpartum Depression (PPD) after the birth, my fears came to fruition when I became unable to bond with or attached to my daughter. I still carry so much guilt about how I let her down in those early days, but five years after her, with two miscarriages in-between, I gave birth to my son and luckily, didn't experience PPD that time around.

As I went through all of these things — pregnancies, births, losses, depression — I was never really sure I'd come out on the other side of them better or worse. Even still, my greatest fear is letting my children down; that I'm not strong enough to help them become who they're meant to be and that I'll be nothing like my grandmother. The funny thing about parenting is, I'm learning new lessons every day. I'm not perfect (by far), but I'm trying to be better than what I had so that someday, if my children choose to be parents, they'll be better than me, and so on. I can honestly say that, aside from my greatest influence — Gram — being a mother (and also a feminist) has reminded me how strong I really am, even when I feel nothing like it.